According to Ookla, the company behind the popular SpeedTest web service, SpaceX’s Starlink internet speeds have increased nearly 58% in Canada over the past one year, and almost 38% in the U.S., Tesla North is reporting. 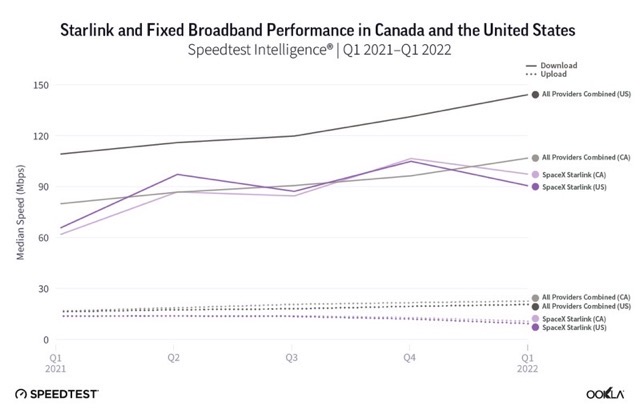 Starlink also was crowned the fastest satellite provider in North America for its speeds in Mexico, with a median download speed of 105.91, followed by Canada at 97.40 Mbps and the U.S. at 90.55 Mbps.

“As we’ve continued to see over the past year, Starlink’s low-earth orbit satellites (LEOs) provide a life-changing service for consumers in rural areas that might not otherwise have access to high-speed internet,” concluded Ookla.

As for Starlink’s median latency, it only saw a marginal increase in both the U.S. and Canada, and changes were negligible.

According to an article published by The Wall Street Journal, Apple Pay adoption has now hit 75% of iPhones in the U.S., a number that has climbed up from only 10% in 2016 and 20% in 2017. Apple says that 90% of retailers across the U.S. now take Apple Pay, whereas only 3% of retailers accepted...
Usman Qureshi
7 mins ago

Less than four months after launching the product publicly, Snap is discontinuing the development of the Pixy flying selfie camera drone as it adjusts its product plans during the economic downturn (via CNBC News). Citing people familiar with the matter, the report was initially published by The Wall Street Journal, noting that the decision was relayed to...
Usman Qureshi
42 mins ago

A report from Taiwan's Commercial Times claims TSMC will start production of 3nm chips based on its N3 process node for Apple by the end of this year (via MacRumors). Another report from the publication indicated that TSMC plans to begin mass production of 3nm chips in September. Apple will be the first customer for TSMC's...
Nehal Malik
50 mins ago