In case you were wondering if innovation is still part of Apple’s DNA: just take a look at the iPhone and iWatch event Apple held yesterday at Flint Center. The company returned to its roots to open a new chapter in its history: four years after Steve Jobs’ death it was able to make a bold move, one orchestrated by Tim Cook.

“This is one of the most important days in Apple’s history,” said Mr. Cook in an interview with The Wall Street Journal. “Innovation is alive and well at Apple. You can scream it from the rooftops.”

You may recall that Apple has, in recent years redefined product categories: it did so with iPhone, the iPad, and now the Apple Watch seems to be continuing this trend. The first hands-on reviews are positive, analysts are also mostly upbeat about yesterday’s announcements, so Apple is about to close a fiscal year with success (let’s wait for the iPhone 6 launch, though).

So what did exactly Tim Cook do yesterday? Well, according to the Wall Street Journal, he made his boldest bets yet. We say bets, because we saw three key things on stage yesterday:

– Apple Pay is the company’s move into the emerging mobile payments industry. Moreover, the company already has major players in the game.

– There is the Apple Watch, a new product category first unveiled yesterday. Apple’s smartwatch won’t be cheap, $349 for the entry level version, while the competitors charge up to $300 for a smartwatch.

– Besides the Watch, we’ve seen two iPhone 6 models, one with a 4.7-inch and the other one with a 5.5-inch screen, a safe bet considering that the handset generates 54% of Apple’s revenue. 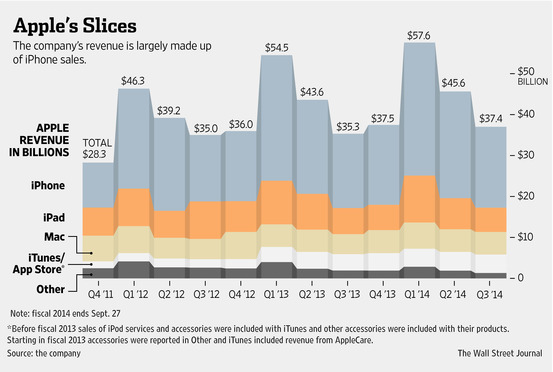 According to a research note Bernstein Research’s Mr. Sacconaghi estimated that the new iPhones will sell 182 million units in Apple’s fiscal year starting in October, up 9% compared to the previous year.