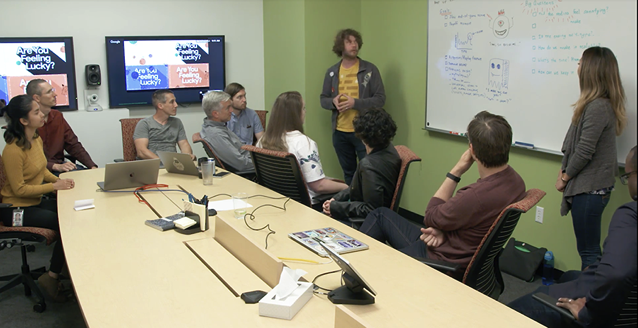 Yahoo’s David Pogue recently got an exclusive invite to meet with the team behind Google Assistant’s personality as well as a rare chance to take his cameras into a Google conference room. During his visit, he was able to carry out a series of interviews with the team to get some fresh insight into the minds of Google’s key AI developers.

Below are some interesting Q&As and excerpts from his lengthy write-up:

So what is Assistant’s personality? Team members describe her — or, rather, it — as friendly, optimistic, humble, and flattering.

“I’d say always helpful, always trying to be useful, but we also want to have a little bit of sense of humor,” says Andy Pratt, features lead for Personality. “It’s not gonna be as snarky as Siri.”

Assistant isn’t like Siri: Its responses incorporate sound effects. “How can we use sound effects, sound layering, music, to create an environment and create a world that goes with not only the games but even little features?” Pratt says. “So when you ask for say the weather, maybe you have the sound of rain in the background.”

Google prides itself on Assistant’s ability to keep track of the thread of a conversation through multiple questions. The classic case:

You: “How tall is John Legend?”
Assistant: “John Legend is five foot nine.”
You: “And how about his wife?”

— and Google knows who “his” refers to. That kind of dialogue parsing, says conversation expert Cathy Pearl, is “surprisingly challenging.”

Check out the video embed below and catch the full story at this link.

Elon Musk has been granted a stay in his pending trial against Twitter over his proposed acquisition of the social media company as the two sides continue talks to close the deal on its original terms — reports The Verge. Musk originally offered to buy Twitter for a whopping $44 billion USD back in April....
Nehal Malik
18 mins ago