A growing rumour that Instagram’s algorithmic feed is limiting the reach of certain accounts to just 7% of their followers has today been debunked by the social network. “We have not made any recent changes to feed ranking, and we never hide posts from people you’re following”, said the Facebook-owned company (via BuzzFeed). 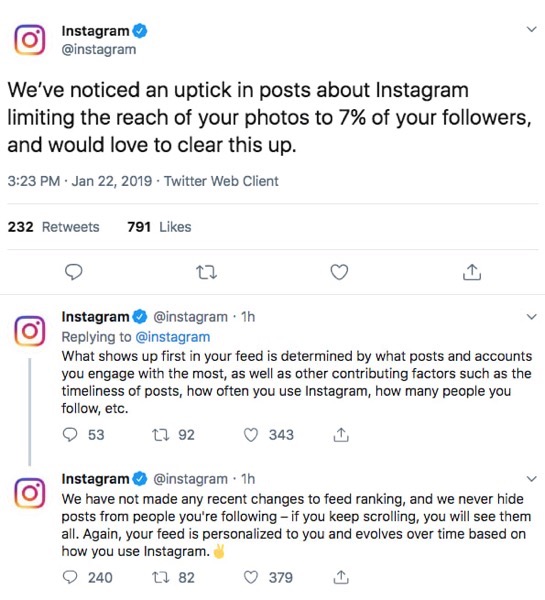 Back in 2016, Instagram changed its once chronologically ordered feed to an algorithmic order. In a series of recent tweets, the company has offered an overview of how its algorithm determines what you see first by prioritizing the accounts you engage with.

The social network has clarified that its feed ranking system does not involve penalizing other accounts and removing their posts from your feed.

“We’ve noticed an uptick in posts about Instagram limiting the reach of your photos to 7% of your followers, and would love to clear this up. We have not made any recent changes to feed ranking, and we never hide posts from people you’re following — if you keep scrolling, you will see them all”

“Again, your feed is personalized to you and evolves over time based on how you use Instagram.”

Perhaps one of the reasons why some accounts request you to comment in their captions is because when you engage with an account’s post, it’s more likely you’ll see posts from that same account at the top of your feed the next time you log in.