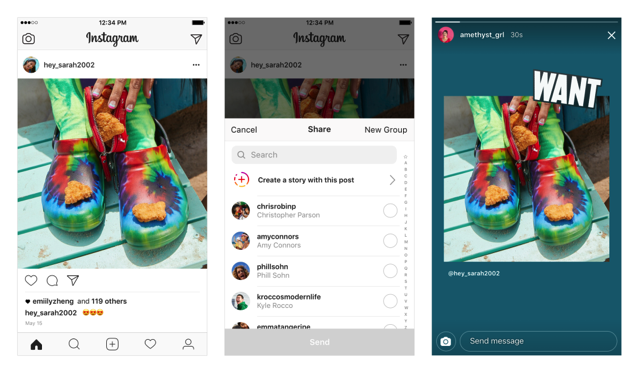 Instagram has today announced a new feature that lets you quickly share feed posts to your story. This way, you can easily promote a post, such as a friend raising money for a cause or a photo of a new design from your favorite brand, by posting it as a sticker to your story.

In order to share s feed post to your story, simply tap the paper airplane button below the post, and you’ll notice a new option to create a story. Now tap it and the feed post will instantly appear as a sticker with a customized background ready to share to your story. You can easily rotate, scale and position the sticker before publishing it.

“All posts shared to stories display the original poster’s username. When you see a post in someone’s story, you can tap it to check out the original post and see more from the person who created it.

You can only share posts from public accounts. If you don’t want your posts shared to stories by other people, you can easily opt out in settings.”

The new feature is rolling out now for Android users and will become available on iOS in the next few days. To learn more, click here.