A couple of months back, we reported that Instagram is testing a new way to move through posts that will bring the effortless way of fast forwarding through Stories to the feed and today, the company did roll out the feature for a brief period, replacing the traditional vertical scrolling of feed with horizontal tap-to-advance (via TechCrunch). 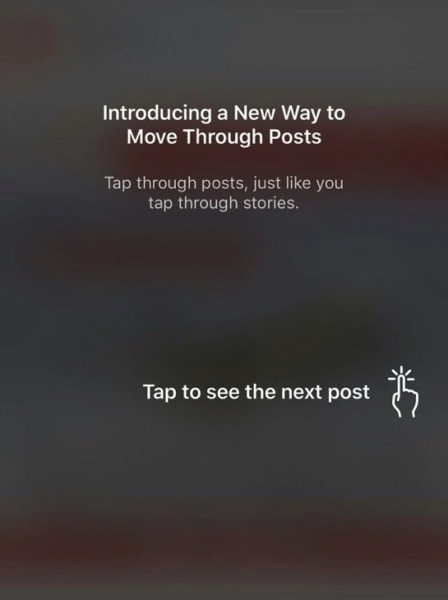 However, the feature was soon pulled by Intagram saying the rollout was a mistake and that the company is still testing the navigation style in Explore.

“Due to a bug, some users saw a change to the way their feed appears today. We quickly fixed the issue and feed is back to normal. We apologize for any confusion” an Instagram spokesperson tells TechCrunch.

Tap-to-advance makes it easier to move between posts with them staying fully in view, compared to scrolling where it can take some adjustment to make sure the top or bottom of a post isn’t cut off.

According to the head of Instagram Adam Mosseri, the company was attempting to test the feature with a small percentage of users, but the bug caused a much broader rollout. Below is what he said in reply to a tweet about Instagram’s new horizontal scroll interface:

Sorry about that, this was supposed to be a very small test but we went broader than we anticipated. ?

The following video shows how the tap-to-advance in the feed worked on Instagram.