In an effort to reinvent private sharing, Instagram is testing a new ‘Favorites’ feature that lets you share posts with a more limited group of friends. According to The Verge, the feature, which allows you to build a list of your closest friends that you can edit at any time, attempts to improve on earlier social network friend lists, encouraging users to post more often by giving them more control over their audience. 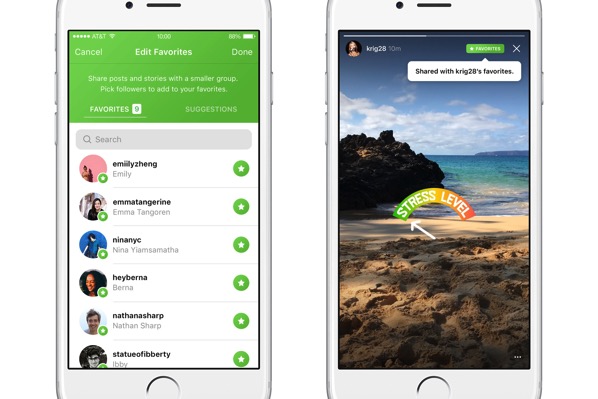 Instagram has started testing the feature among a small percentage of users starting today, with hopes of rolling it out more broadly in the coming months. “We really want to get this right,” says Robby Stein, product lead at Instagram. The feature is more than a year in the making, and nearly every portion of the app has been modified to accommodate it.

When you create a regular post or a story post, you’ll see new options to share them to your favorites. When you do, the post will be visible only to the people on your list — and is denoted by a green “favorites” badge on the post. Your Instagram profile also gets a new favorites tab, denoted by a star, that contains all the non-ephemeral posts you’ve shared to your favorites over time.

No one gets notified when you add or remove them to the list. They’ll know they’re your favorite only when they see a green “favorites” badge at the top of your posts.

There’s no limit on the number of people you can add, though the company expects most people will add somewhere between 10 and 30 people.