As part of its ongoing youth safety efforts at Meta, formerly Facebook, the company has announced new tools and ‘teen safety features’ to keep young people even safer on Instagram. 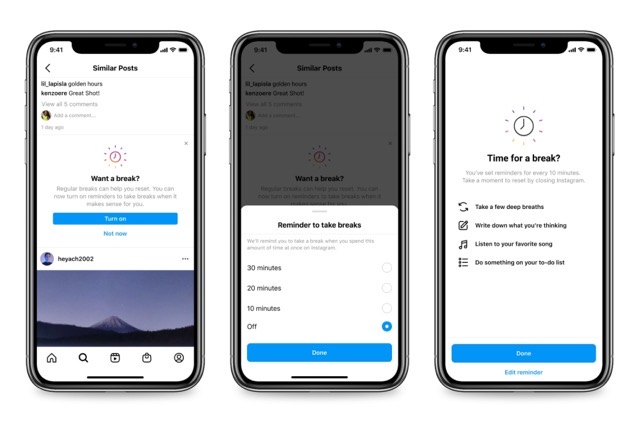 Starting today, a new ‘Take a Break’ feature on Instagram is launching in the US, UK, Ireland, Canada, Australia, and New Zealand. If you’ve been scrolling for a certain amount of time, the app will ask you to take a break. Users will also get notifications suggesting they turn on this feature.

Meta is also launching its first tools for parents and guardians to see how much time their teens spend on Instagram and set time limits. These tools will begin rolling out to parents in March 2022.

“We’ll also have a new option to notify parents if their teen reports someone, so they have the opportunity to talk with their teen about it. This is the first version of these tools and we will continue to add more options.

We’re developing a new educational hub for parents and guardians with additional resources such as product tutorials and tips from experts.”

Meta says it will also be switching off the ability for people to tag or mention teens who don’t follow them on Instagram.

On Saturday evening there was a Twitter Spaces hosted by Mario Nawfal along with Kim Dotcom, which Elon Musk joined in from using Starlink on his private jet as it took off. The topic was to cover the Twitter Files shared by the social network recently, but Musk also talked about various issues, including advertising […]
Gary Ng
3 mins ago