As reported by The Next Web, Instagram is testing a new feature dubbed ‘Type’ for its Stories. The new feature, which shows up as another option at the bottom of the Stories camera next to older choices like Boomerang and Rewind, is the social network’s latest effort to put emphasis on written stories because sometimes images and videos just aren’t as effective as plain old text. 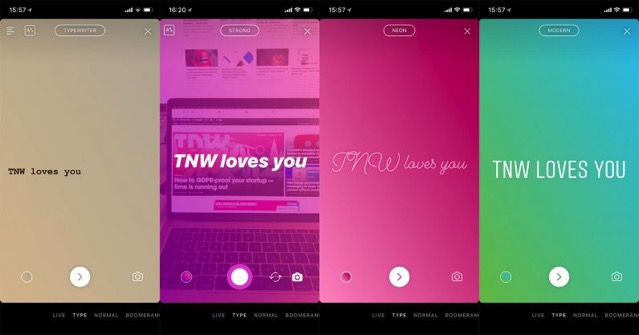 The source notes that the ‘Type’ feature lets you choose from several fonts, while a plain background or gradient is selected automatically by Instagram to go with it. Users also have the option to upload an image of their own to use as a background, though Instagram will apply a filter on it in order to emphasize your text. The feature was initially spotted late last year in Japan but now, it is gradually being rolled out to more users globally.

In addition, WABetaInfo has noticed that Instagram is also testing the ability to send a notification when someone takes a screenshot of your story.

Previously the company supported notifications for screenshot of direct messages, but this is the first time we’ve seen it for stories. That said, it does cut you some slack – it won’t notify users of your first offense, but will do so after your second strike.

There is no official word yet from Instagram regarding either of the two features.