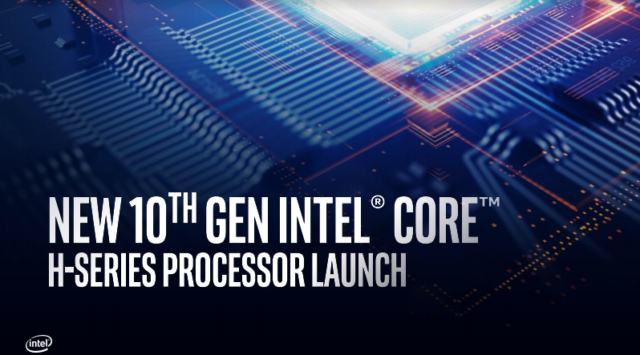 Intel has pulled the curtain back on its 10th Gen Core mobile H-Series processor. Codenamed Comet Lake H, the H-Series mobile processor family will be available in six different SKUs ranging from i5 to i9, which breaks the 5GHz 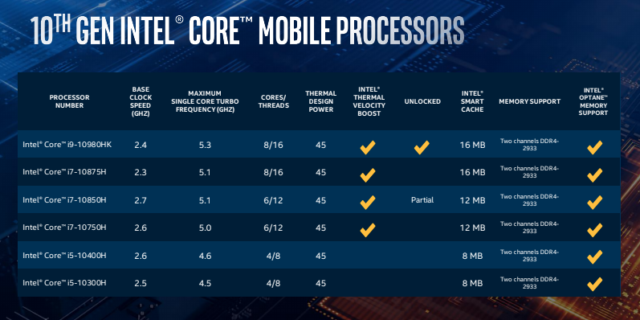 Breaking down the lineup, the Intel Core i9-10980HK is the premier processor of the H-Series. It offers a base 2.4GHz with up to 5.3GHz thanks to Intel’s Thermal Velocity Boost and Turbo Boost Max Technology. The Intel Core i9-10980HK has 16 threads and 8 cores unlocked. This will allow for overclocked performance whether it is for content creation, PC gaming, or a combination of the two.

The Intel Speed Optimizer is an intuitive one-click overclocking feature built into the Intel Extreme Tuning Utility, leveraging thermal delivery and power headroom to users. Intel boasts the improved multi-threaded performance that can be reached.

It’s important to note that the mobile Comet Lake H is being built on Intel’s 14nm processors. The upcoming Tiger Lake, which was shown at CES, and the current Ice Lake are both built on the 10nm process. Comet Lake is more similarly built as the Y-Series and U-Series, found in the Macbook Air and MacBook Pro, which released in 2019.

This year, Comet Lake H will be built and integrated into over 30 thin and light mobile gaming laptops. Intel touts that the 10th Gen H-Series machines will come in at 20mm or less. With gaming and content creation at the forefront, Intel envisions that not only consumer machines will feature the new chipset, but also workstations and commercial products as well. 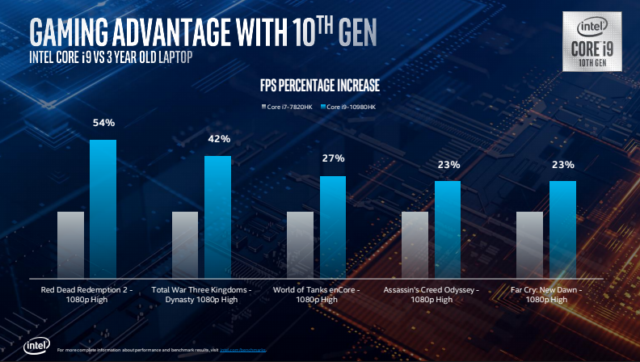 Working around the assumption that a user may be looking to upgrade their three-year-old laptop, Intel expects they will notice a significant increase in performance while gaming. With the Core i9, an increase of up to 54% FPS can be achieved. For instance, Assassin’s Creed Odyssey, when played on 1080p High settings will gain a 44% FPS increase. Red Dead Redemption 2 hits that 54% mark.

In addition, 44% overall performance is promised and rendering 4K video will be twice as fast compared to the three-year-old laptop. As with Intel’s other 10th Gen chips, Comet Lake H will feature Wi-Fi 6 support and Thunderbolt 3 integration.

In the coming weeks, the Comet Lake H chips will be found in the machines of many of Intel’s partners including MSI, Asus, Acer, Lenovo, and more. Seeing as though Intel is raising the bar on maximum speeds, it will be interesting to see where it falls when price and battery life are stacked against competitors this year.

Google on Tuesday announced new product updates, and its latest includes the debut of the Nest Wifi Pro with Wi-Fi 6E support, the first router from the company that is triband mesh network ready. Wi-Fi 6E (E for Extended) leverages the new less-crowded 6 GHz radio band and offers speeds up to two-times faster than […]
Gary Ng
9 mins ago

Google today announced a major update for the Google Home app that brings a fresh new design, Matter integration, support for both Wear OS and the web, and plenty of new features. The company said it set out to reimagine Google Home because the number of average connected devices per user has gone up from...
Nehal Malik
31 mins ago