In a detailed proposal published yesterday on AnandTech, Intel has highlighted the advantages of the new USB-C connector, suggesting that it should be used as a replacement for the 3.5mm headphone jack in future smartphones and tablets. The company has joined Chinese firm LeEco in promoting the new standard, who recently introduced a bunch of smartphones without a 3.5mm port, relying on the charging and data slot to output audio as well. 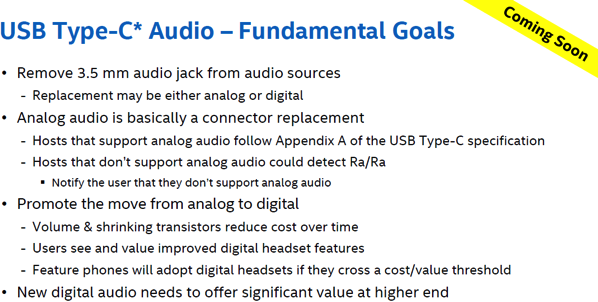 At its Shenzhen developer forum this month, Intel revealed that it is finalizing the USB Type-C Digital Audio technology and plans to release its specification later in Q2. The company said that it is working on updating the USB Audio Device Class 2.0 specifications to support new connector, expand the list of recent audio specifications and features, improve power management and simplify the discovery and configuration model to make the upcoming headsets as easy to use as today’s headsets.

“Usage of digital audio means that headsets should gain their own amplifiers, DACs and various other logic, which is currently located inside smartphones. Intel proposes to install special multi-function processing units (MPUs), which will perform beam forming, noise suppression, acoustic echo suppression (AES), acoustic echo cancellation (AEC), non-linear processing and other operations. The MPUs will also support HDCP technology, hence, it will not be possible to make digital copies of records using USB-C digital headset outputs”.

Just as the industry has successfully replaced analog cables with HDMI for video equipment, it is quite possible we may see the retirement of audio jacks in the next few years which may be replaced by USB-C Digital Audio connectors.