If you’ve been a long time reader of iPhoneinCanada.ca, you can probably remember our first attempt at a podcast through TalkShoe! It was started through the efforts of iBog and we had fun while it lasted. After a short sabbatical, we are super excited to debut our new podcast appropriately named–The iPhone Podcast.

The focus of this podcast will be to bring the best iPhone-related news together (not just Canada), plus all the jailbreak news you can handle via our experts, RoryPiper and Dusty from iEvolution.ca. If you want the inside scoop on what’s happening in the world of iPhone, this is a podcast you must listen to. Oh, and we’re going to throw in some iPad news as well! 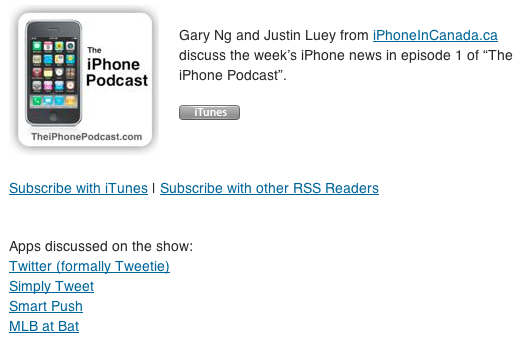 It is being produced by myself and Â fellow iPhone enthusiast, Justin Luey. I hope you take a chance to listen to our first episode and provide us with some valuable, honest feedback.

The iPhone Podcast will continue to grow, but we need your help. Check out our first episode, tell us what you think and leave ratings and comments in iTunes. Of course, we will be bringing in some prizes later on (we loving giving away free stuff!). Thanks and see you on the airwaves!

Click here to listen to Episode 1 of The iPhone Podcast. Don’t forget to follow us on twitter.com/iPhone_Podcast so you won’t miss out on giveaways!