Intuit has launched QuickBooks Online, a cloud-based service to allow entrepreneurs to manage their business information online and it comes with an iOS optimized interface for the iPhone and iPad.

Online banking integration – QuickBooks Online safely links your accounting to your bank, importing your statements so you don’t enter those transactions twice. Keep track of your cashflow.

Estimate-Invoice-Payment – In three clicks – designed to be easier, quicker, and more accurate than using spreadsheets. Bill customers promptly and professionally. Helps you get paid faster.

Data back-up – QuickBooks Online stores all financial data on central servers, protecting it in the event your laptop, tablet or smartphone is lost or stolen. Have peace of mind knowing your information is automatically backed-up, every two hours.

Anywhere, anytime access – QuickBooks Online gives you and your accountant protected access to your accounts from anywhere in the world with an Internet connection.

There’s a free 30 day free trial, and after that prices range from $9-$29 per month, depending on what services you want. 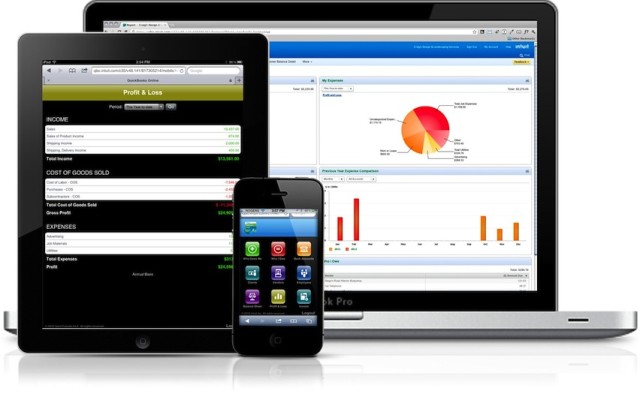 Looks like an interesting service, we would expect Intuit to roll out some dedicated iPhone and iPad apps in the future, as that would be even better. In late February, Intuit also released SnapTax, an app that allows Canadians to file tax returns right from their iPhone.