Apple has updated their Developer portal to show new data regarding the installation of iOS 11. According to App Store data ending on April 22, 2018, iOS 11 is now on 76% of devices, with 19% still on iOS 10 and 5% on an earlier version of iOS. 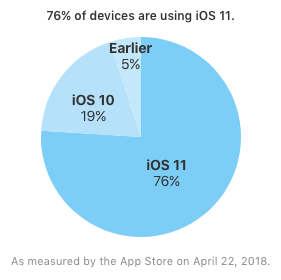 Just yesterday Apple released iOS 11.3.1 to address an issue with non-responsive touchscreens for those who tried installing third party displays.

In comparison, the majority of Android installs (26%) are on Marshmallow, which first debuted back in 2015, followed by Nougat at 23%, which debuted in 2016.

Unless you have a Google-branded smartphone, which offers direct updates from the search giant, other Android users need to wait for updates to be tested and released by their wireless carriers, adding another layer of complexity.

Up next for iPhone, iPad and iPod touch users is the final release of iOS 11.4, which will finally bring forth AirPlay 2 and Messages on iCloud. The final release still has some time to go, as iOS 11.4 is only in its second beta right now for developers and public beta testers.

Wedbush Securities analyst and regular Apple bull Daniel Ives said in a recent note to clients that the iPhone maker's upcoming earnings report for its fiscal first quarter of 2023, scheduled for Thursday, February 2, will be the "most important earnings" for the tech market (via Apple 3.0). "After a horror show year in 2022...
Nehal Malik
30 seconds ago