According to a study carried out by Mixpanel, Apple’s latest iOS 12 is lagging behind all previous versions to mark the slowest adoption rate of any iOS release yet (via PCMag). 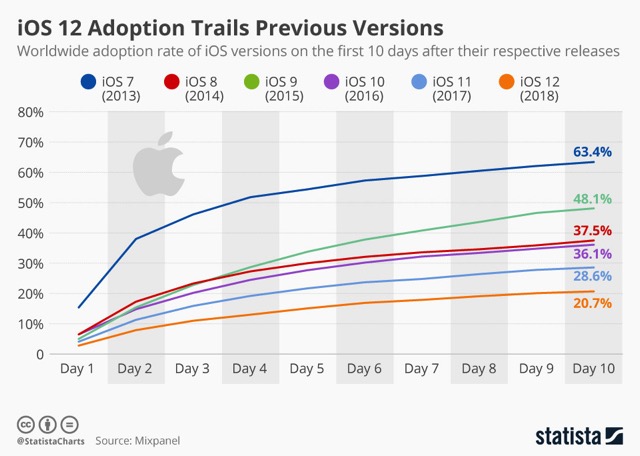 But now, it appears the iterations of iOS have gotten less spectacular since then. While those who have updated to iOS 12 have been able to play with Memoji and can see how much time they’re spending looking at their screens with Screen Time, are still not able to make as-promised 32-person FaceTime chats.

“The lackluster adoption could be due to a lack of interest in the features. But users might also be waiting to see what issues arise with the OS. Though every version of iOS goes through testing before its release, we’ve experienced some less-than-welcome surprises, such as the battery-life debacle of iOS 11. There are reports right now about iMessages going to the wrong recipients, which is a nightmare scenario for pretty much anybody.”

Meanwhile, Apple’s VP of product of marketing Greg Joswiak has recently said that he expects 80% of iPhone and iPad users to be on iOS 12 within a few months.

Have you upgraded to iOS 12 yet? If not, let us know what’s holding you back.