Today, BGR continues its iOS 4.3.1 story with a brief hands-on of an iPhone with iOS 4.3.1 installed.

As originally reported, it seems that iOS 4.3.1 will deliver minor bug fixes but also could improve battery life.

We reported the changes from iOS 4.3 a few days back, and it really does look as if iOS 4.3.1 will simply fix bugs, hence the version numbering. Battery life seems a tad bit better, though that’s not scientific at all.

The better battery claim has no real proof at this time, but iOS updates are known to marginally increase battery life. 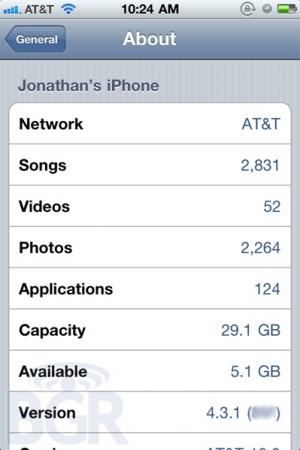 Popular cryptocurrency exchange Coinbase on Thursday announced it had to disable the ability to send NFTs on the iOS version of Coinbase Wallet, the company's mobile crypto wallet app, because Apple wanted a 30% cut of the "gas fees" involved. https://twitter.com/CoinbaseWallet/status/1598354819735031809 Gas fees are essentially transaction fees on the Ethereum blockchain network. They are paid...
Nehal Malik
36 mins ago