Teehan+Lax has just released iOS 6 GUI PSD for the iPhone 5, which can now be downloaded from their website. The designers have released the PSD as a free license file (13.79 MB), so that users can “conceive, design, pitch and build really great software that we’ll come to use on a daily basis” (via iClarified). 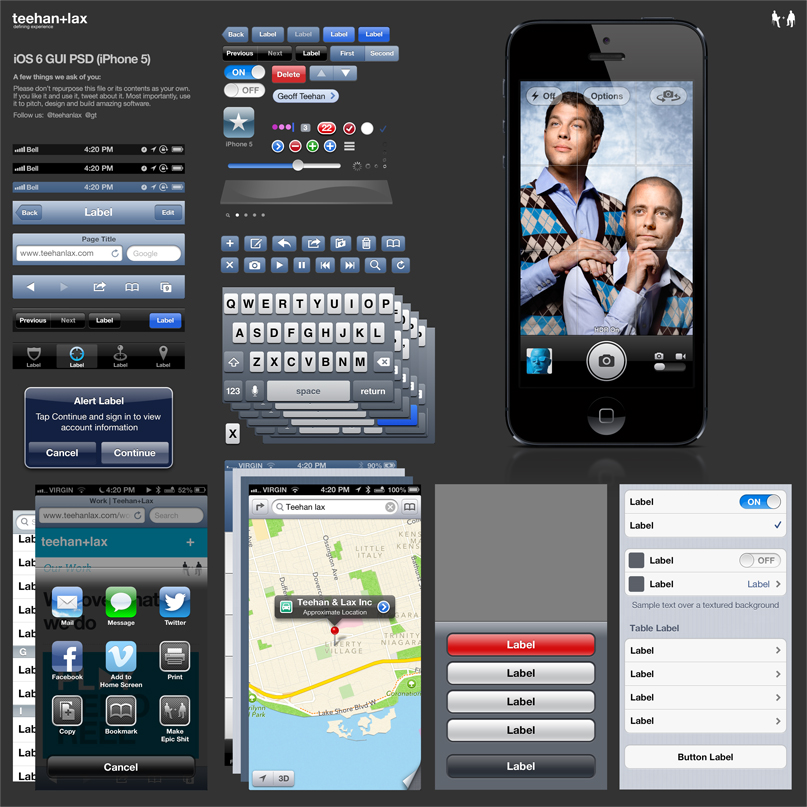 They say that of all their iOS GUI Photoshop creations, the one for the iPhone is by far the most popular, which is whey they take it pretty ‘seriously’. On asking why it’s free, they say the answer is simple: Create more value than you capture.

This version, iOS 6 for iPhone 5, is a bit different than previous version. Those of you who have downloaded and used these files have probably noticed they’ve become quite bloated. As fast as our computers are today, they still get pretty sluggish when working in a document that contains tens of millions of pixels with hundreds of shape layers. This time around we focussed on making the file a bit more usable. It’s smaller in file size and has a reduced canvas making it quite a bit more manageable.

If you think the designers have missed something common, you can let them know via Twitter.

Spotify is launching a new Home experience that includes feeds for both Music and Podcasts & Shows, making it easier for listeners to scroll through the type of content they’re looking for. The updated Spotify home screen will make the experience more personalized while allowing users to dig even deeper into their recommendations. In the...
Usman Qureshi
10 hours ago

Snapchat is launching a new in-app parental tool called 'Family Center,' to help parents get more insight into who their teens are friends with on the social media platform. With Family Center, parents can find out who their kids have been communicating with, without revealing any of the substance of those conversations. "Our new Family...
Usman Qureshi
11 hours ago