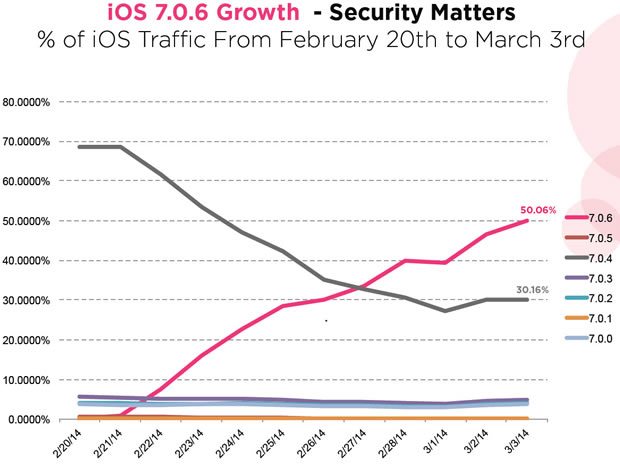 Apple released iOS 7.0.6 on February 21, addressing a critical security issue due to which the update saw a 13% adoption rate in North America just two days after its debut. Now, latest numbers from Onswipe are suggesting that global adoption of iOS 7.0.6 has surpassed the 50% mark, CNET is reporting. Onswipe’s mobile market and data cover more than 17.7 million iOS devices around the world.

The research firm, whose data is a pretty good indicator of the growing demand for iOS 7.0.6, however tracks only a small slice of the total number of iOS devices globally. Onswipe observed that the update’s adoption rate climbed from 10% on February 22 to over 30% on February 26, almost 40% on February 28 and just over 50% on March 3.

Apple rolled out the latest version of iOS specifically to patch a security hole that would allow an attacker to access and modify data supposedly protected by SSL. Meanwhile, reports are claiming that iOS 7.1, which is currently being beta tested, could launch as early as next week,