Apple’s most recent iOS 7 beta seems to reinforce earlier whispers that the company is preparing major changes to boost its hardware sales. It is preparing to make the popular iWork suite and possible other premium content creation apps free when the revamped mobile OS reaches customers this fall. 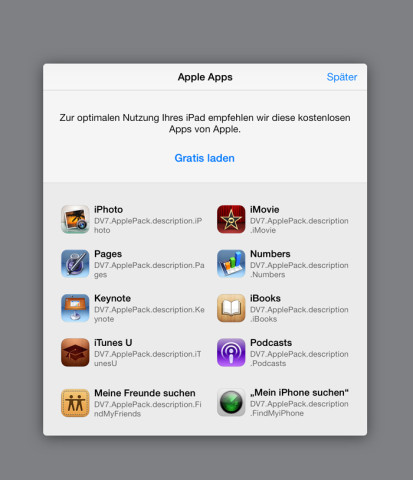 The hint is coming from Apple itself. The German blog iFun (via 9to5Mac) reports that when you first launch the App Store on iOS 7 beta 3, you’ll be welcomed by Apple’s recommended free app screen that usually recommends free apps like iBooks, iTunes U and Podcast.

As the above screenshot reveals, Apple recommendation list now includes paid apps such as the iWork suite — Keynote, Pages and Numbers — and Garageband, iMovie and iPhoto.

Right now, if you want to own the iWork suite, you need to shell out $30. However, with the introduction of iWork for iCloud web apps, offering these apps free makes sense, especially since Google and Microsoft are rolling out their productivity tools on iOS.

Apple is urging suppliers to make sure that all shipments from Taiwan to China follow Chinese customs regulations to avoid processing delays at the border — reports Nikkei Asia. As political tensions between China and Taiwan continue to rise, the former has started strictly enforcing a long-standing rule that requires Taiwan-made imports to be labelled...
Nehal Malik
18 hours ago

Amazon announced on Friday it has entered into a merger agreement to acquire robot vacuum maker, iRobot, in a $1.7 billion all-cash deal. “We know that saving time matters, and chores take precious time that can be better spent doing something that customers love,” said Dave Limp, SVP of Amazon Devices, in a statement. “Over...
Gary Ng
19 hours ago