Apple has updated its App Store Distribution page to note iOS 8 adoption has reached 77% of devices based on App Store usage, ending on March 16, 2015: 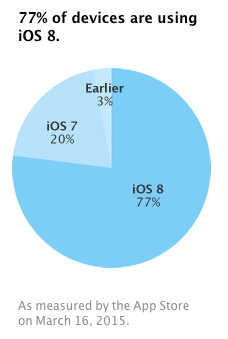 The adoption rate has jumped 5% since last month, and has picked up since its rocky start due to free space requirements and bugs. Compare this to iOS 7, which reached 78% of iOS users in roughly three month’s time.

To put these numbers into perspective, only 3.3% of Android users are using their latest mobile OS Lollipop 5.0, while the majority of users are on KitKat 4.4:

If Apple decides to hold WWDC in the summer again (which it most likely will), we are only three month’s away from possibly seeing a preview of iOS 9, rumoured to focus on stability and performance versus new features.