According to a report by MacRumors, a bug in the “Reset All Settings” option (under Settings -> General) in iOS 8 permanently erases all iWork documents stored in iCloud Drive. 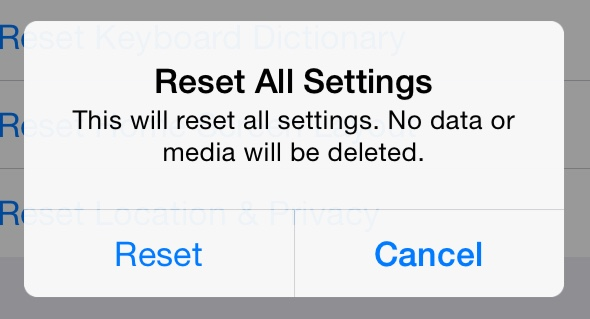 As you can see from the picture above, the “Reset All Settings” option explicitly states that no data or media will be erased. The option in the Settings app on iOS is intended to reset all user preferences (including Wi-Fi, Bluetooth, and other settings) back to the default factory settings.

Testing done by MacRumors shows that once the reset option is activated, all iWork documents (Pages, Numbers, and Keynote) stored in iCloud drive are permanently removed from the user’s iOS device. After allowing Apple’s cloud storage system to sync, those same documents were also erased from iCloud.com and on a Mac running OS X Yosemite (which was synced to the same iCloud account).

If you are running OS X Mavericks the files can be recovered fairly easily, however there is no simple solution for users running Yosemite.

“One user said that Apple was waiting on engineers to investigate the issue, while another said his account had been placed in troubleshooting mode to attempt to recover the data.”

It looks as though Apple is aware of the issue and the company is trying to find a fix for the bug. For users who lost iWork documents, the only solution is to contact Apple and see if they are able to recover your files.

Apple introduced iCloud Drive alongside the announcement of iOS 8 and OS X Yosemite back in June at WWDC. The company’s new storage solution is meant to help iOS and OS X users keep documents synced (with as little effort as possible) across both platforms.

TikTok has revealed its 2022 year in review, highlighting the latest trends, creators, movements and moments that made this year one to remember in Canada and around the world. According to the social network, it says the “TikTok community elevated and celebrated creative expression in new ways–discovering, creating and sharing content that captured our collective imagination.” […]
Gary Ng
59 mins ago