After digging through iOS code and discovering references to experimental networking protocol Li-Fi, iOS hacker and jailbreaker Chris Fromm has uncovered what he believes is confirmation the headphone jack is set to disappear in the next iPhone, within iOS 9.3 beta 1.1. 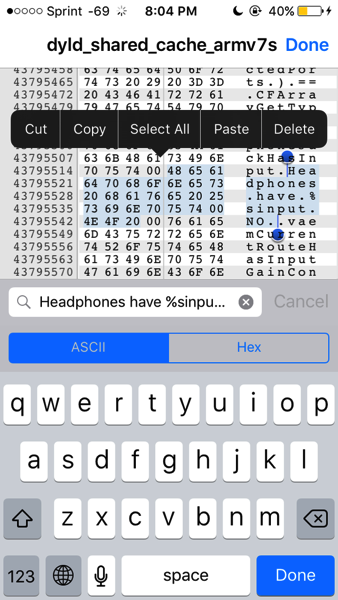 Fromm explains to iPhone in Canada he uncovered this yesterday, and the code can be found within the following directory within iOS 9.3 beta 1.1:

Recent rumours have suggested the next-generation iPhone would skip the 3.5mm headphone jack, in efforts to make the phone thinner, waterproof and support wireless charging. The existing Lightning connector would then be an all-in-one connector for charging, syncing and headphones.

While it’s easy to jump the gun, reference to this code does not mean the headphone jack will be gone in the next iPhone. We’ll wait for case makers and shell leaks to see if any visual proof may be available.

As expected, some Apple users are unhappy at the thought of the standard headphone jack disappearing in the next iPhone. An online petition started a while back has already surpassed 288,000 signatures.

Apple's VP of Platform Architecture and Hardware Technologies Tim Millet and VP of Worldwide Product Marketing Bob Borchers recently sat down for an interview with TechCrunch where the pair talked about the tech giant's homemade M-series chips, gaming on Macs with Apple silicon, and more. Millet, who has been at Apple for almost 17 years and...
Nehal Malik
7 mins ago

The National Football League (NFL) and DAZN Group announced on Tuesday to extend their partnership in Canada and globally, with a new 10-year deal that begins with the 2023 season. With NFL Game Pass International, football fans outside the USA will be able to watch every NFL game through the regular season, postseason and the final […]
Gary Ng
17 mins ago