What if You Used iOS 9’s Battery Saving Low Power Mode All the Time?

What happens if you enable iOS 9’s battery saving Low Power Mode all the time? Matt Birchler (via MacStories) did some unscientific tests, which returned some interesting results. He enabled the feature on certain days of the week and compared his remaining battery life to days it was disabled.

Here’s his graph below—as you can see, Low Power Mode saw battery remaining at the end of the day hovering around the 50% mark: 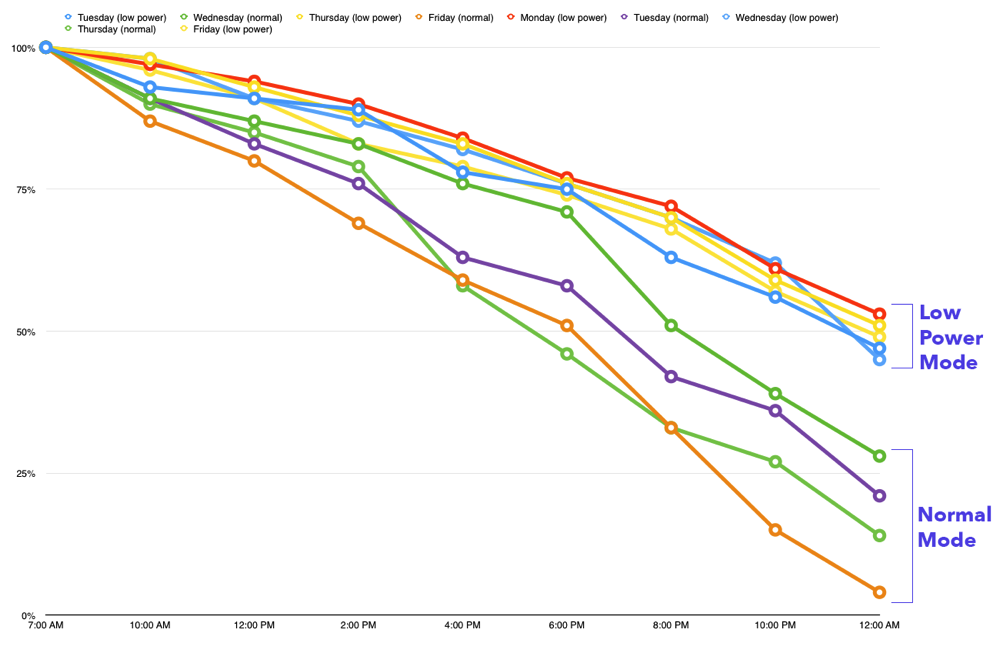 Birchler says in his casual tests, his iPhone 6 Plus battery went through battery 38.7% slower in Low Power Mode:

There is a definite separation between the days where Low Power Mode is used and the days when it is not. Even the best day in normal mode pales in comparison to the worst day of Low Power Mode. On average, my iPhone chewed through battery 38.7% slower when in Low Power Mode. This is a drastic difference! And while this is not a huge concern for me (my 6 Plus makes it through everyday without needing a charge), this would make all the difference to those with iPhones that are struggling to get the battery life they would like.

Of course, while in Low Power Mode, your phone’s display dims faster than normal, animations are disabled and the CPU clock speed is slowed down, plus background updates don’t happen as often, all in an effort to save battery life. Low Power Mode pops up as an option once your battery hits 20% remaining. Once you charge your battery to 80%, Low Power Mode will disable itself.

Are you using Low Power Mode? Has it saved you from running out of battery?