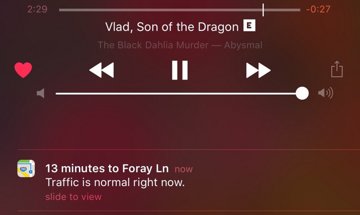 As pointed out by Reddit user MrMacNeil, iOS 9 beta can predict what you want even before you unlock your iPhone based on user habits. He noticed that after getting into their car after work, directions home appeared on their iPhone’s lock screen. According to AppleInsider, the feature also extends into the Maps app in iOS 9, which can predict directions automatically when a user is getting ready to drive.

A major focus for Apple in building iOS 9 is making it even easier to access the information you need, in part by predicting what you want before you unlock your phone. One way the upcoming operating system update will do that is by knowing when you get into your car, and predicting where you’re probably planning to drive. With iOS 9, the iPhone knows when a user gets in their car because of a connection to the vehicle’s infotainment system, either via Bluetooth or USB.

The source notes that many other users have also commented on the Reddit thread to confirm that the functionality works on their Apple Watch as well. So while iOS already offers estimated travel times in the Notification Center’s Today view, with the release of iOS 9 this fall, travel directions will become even more convenient, with popular destinations automatically showing up on the iPhone’s lock screen.

Do you think this could be a killer feature in iOS 9?