iOS and Android Account for 91% of Global Smartphone Marketshare

iOS and Android accounted for a combined 91.1% of global smartphone shipments during the holiday quarter of 2012 according to the International Data Corporation (IDC) Worldwide Quarterly Mobile Phone Tracker. 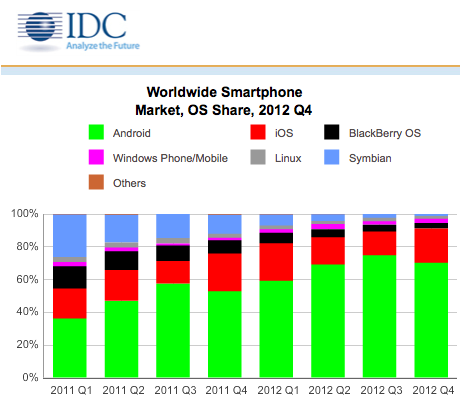 As a Gartner study had already pointed out, Android is the unquestionable king of the global smartphone market. The IDC data sheds light on Android smartphone shipments during the 13-week holiday period. The IDC data shows Android manufacturers have shipped a total of 159.8 million units, accounting for 70.1% of all smartphone shipments, while Apple’s 47.8 million units pushed the company’s market share for the fourth quarter to 21% in terms of mobile OS share.

“The dominance of Android and Apple reached a new watermark in the fourth quarter,” said Ramon Llamas, research manager with IDC’s Mobile Phone team. “Android boasted a broad selection of smartphones, and an equally deep list of smartphone vendor partners. Finding an Android smartphone for nearly any budget, taste, size, and price was all but guaranteed during 2012. As a result, Android was rewarded with market-beating growth.”

“Likewise, demand for Apple’s iPhone 5 kept iOS out in front and in the hands of many smartphone users,” added Llamas. “At the same time, lower prices on the iPhone 4 and the iPhone 4S brought iOS within reach of more users and sustained volume success of older models. Even with the Apple Maps debacle, iPhone owners were not deterred from purchasing new iPhones.” 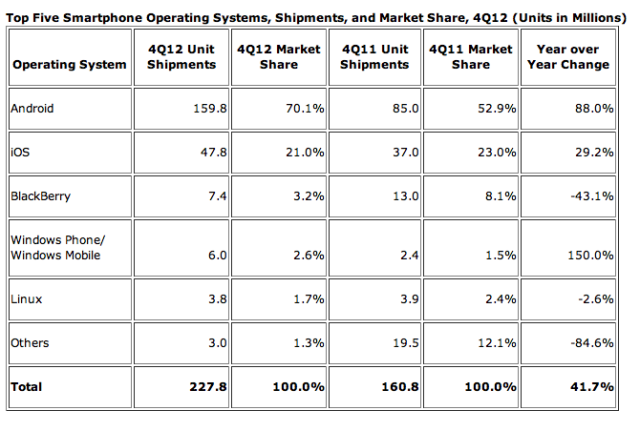 When compared to the same quarter a year ago, Android handset shipments have grown a tremendous 88%, while iOS has recorded a 29.2% growth, which is impressive.

Google announced on Thursday it will be shutting down Stadia, its cloud gaming service, in January 2023. The announcement took many in the gaming community by surprise, but it wasn’t an unexpected one. “While Stadia’s approach to streaming games for consumers was built on a strong technology foundation, it hasn’t gained the traction with users that […]
Gary Ng
37 mins ago