According to app analytics and market intelligence firm App Annie’s latest report summarizing the 10 successful years of Apple’s App Store, over 10,000 iOS apps have individually generated over $1 million in consumer spending since 2010, with over 2,000 in the $1 million to $10 million range during 2017 alone (via VentureBeat). 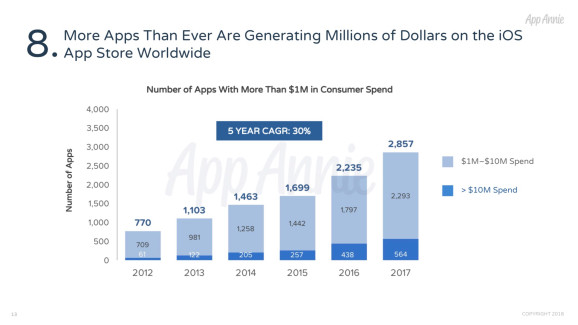 More than 170 billion apps have been downloaded since the App Store’s inception in 2008, totalling more than $130 billion in consumer spending. The report highlights that a total of 2,293 App Store apps are making over $1 million every year, whereas 564 apps are generating over $10 million each every year.

Moreover, the App Store generated nearly twice as much money as the Google Play Store in 2017 despite having only 30% of worldwide download share.

As of today, users in many countries keep around 100 apps installed on their iOS devices, actively using roughly 40 every month. Users in France, Indonesia, and South Korea have the highest numbers of apps installed. […]

Although games accounted for only 31 percent of all downloads in 2017, they represented 75 percent of consumer spending, with particular spending strength on iPhones in the Asia-Pacific region. […]

While audio apps such as Pandora Radio and Spotify topped the revenue charts for years, three video apps — Netflix, Tencent Video, and iQiyi — were in 2017’s top five, alongside the dating app Tinder.