According to a recent survey by marketing firm App Promo (via Ars Technica), majority of iOS app developers struggle to generate enough revenue to sustain a business on their apps alone. The survey reveals that almost 59% of apps don’t break even and 80% of developers fail to sustain a standalone business. iOS developer Pat McCarron says: “Right now your app is likely not going to be found if you never break the Top 100 or Top 200 lists. Users won’t navigate forever down the list of top apps to find yours sitting lonely at the bottom“. 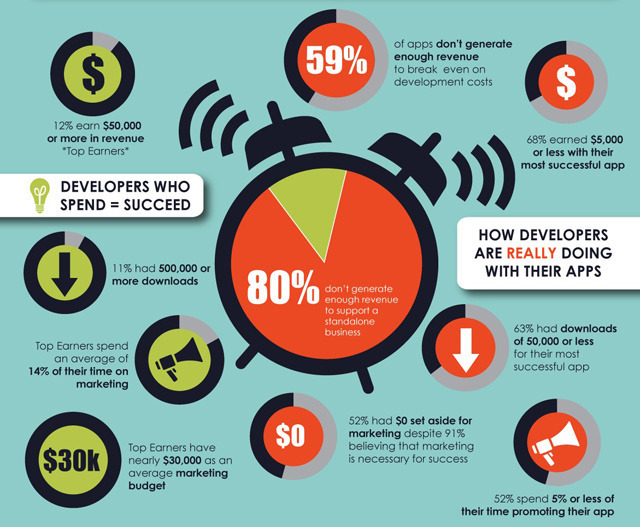 Some developers said that App Promo’s assertion that 59 percent of apps don’t break even is a bit on the generous side. Former NetNewsWire developer Brent Simmons suspects the figure is “more like 85 percent,” while Lucius Kwok believes it may “fall in the range of 90 percent or higher.”

Apple encourages practically anyone to try their hand at iOS development. Just $99 per year gives you access to Apple’s developer program, the development tools are a free download, and numerous books line bookstore shelves (both physical and virtual) offering tips to budding iOS developers.

“Users still expect quite a lot, even for 99 cent apps,” developer said. “Worse, anything over perhaps a couple bucks on iOS is a ‘premium’ price, and you’ll get dinged on the price everywhere, by both users and journalists. That can make it very difficult to recoup costs, let alone turn a profit.”

It appears that the iOS App Store has now become more of a lottery and less a chance for small developers to succeed along with well-established companies.

An Apple employee is facing possible termination after posting a TikTok video that has since gone viral. Paris Campbell, who has worked at Apple for six years, posted a TikTok offering some advice to another user who lost their iPhone at Coachella. Campell now allegedly faces termination for identifying herself as an Apple employee, discussing...
Steve Vegvari
51 mins ago