iOS Now Has 73% Share of Mobile Devices in the Enterprise

Good Technology has reported in its Mobility Index Report for Q4 2013 that iOS now has a 73% share of mobile devices in the enterprise market, with iPad accounting for 91.4% of all enterprise tablet deployments and iPhone representing 54% of all smartphone activations during Q4 (via AppleInsider). The report highlights that over 2,000 companies were found using Apple’s services in the fourth quarter of 2013. 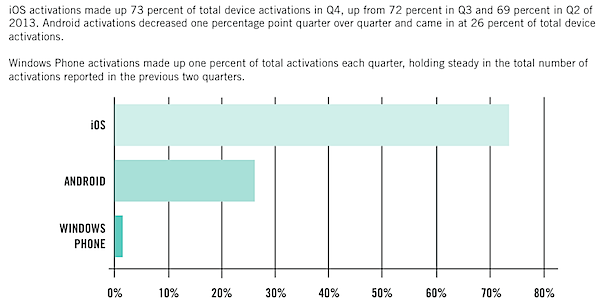 Good obtains this data from its Good Dynamics Secure Mobility Platform, which is used by many Fortune 500 companies in commercial banking, insurance, healthcare, retail, and government. The report notes that total enterprise app activations grew by 54% over the previous quarter, an increase over previous quarterly growth rates of 43%. Deployment of custom developed apps grew at a rate of 55%, which primarily benefitted Apple as Good says in its report that, “iOS devices claimed the top ten spots for most popular devices among users.”

“From a device perspective, we continued to see an increase in iOS activations this quarter, which we can attribute to two new iPhone models coming to market just before the start of the quarter. The overall number of device activations has increased 34 percent from Q1 to Q4 of this year, indicating strong, continued growth and adoption of the Good Secure Mobility Solution. As many organizations are migrating away from BlackBerry to meet end user demand and embrace newer platforms like iOS and Android, they are deploying Good’s cross-platform solution to secure both their data and devices.”

Meanwhile, Android’s share of enterprise activations continued to decrease quarter over quarter at 26%.