iOS May Be Slipping but Appleâ€™s Profit Margin Is Excellent

Back in June, reports showed that Googleâ€™s Android surpassed Appleâ€™s iOS platform to become the third most popular smartphone OS in the world. Last week, a new marketing intelligence report from comScore shows not only Apple, but RIM, Microsoft and Palm all losing ground to Android in the U.S. Yet today, Fortune MagazineÂ reports a very different picture when it comes to Appleâ€™s profits with regards to mobile handset sales.

The numbers are staggering. In the first half of 2010, Apple sold only 17 million of the over 600 million handsets sold worldwide. Yet for the same time period, Appleâ€™s share of industry profits was an impressive 39%! That level of profitability is the reason why Canaccord Genuityâ€™s new Apple specialist T. Michael Walkley gave them a â€œbuyâ€ rating with a target per share price of $356. 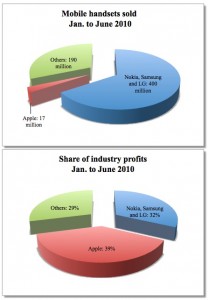 As youâ€™ll see in the graph (click for a larger version), there is some generalizing with Nokia, Samsung and LG being grouped together but that further supports Walkleyâ€™s recommendations. If Apple can surpass profitability by selling only 4.25% of the handsets those three sold in the same timeframe, they are certainly doing something right. Or theyâ€™re gouging us unmercifully.

Make no mistake, Apple will surely be very pleased with reports and profits like this but the fact still remains that Android is poised to overtake iOS in the U.S. like it did worldwide. Iâ€™m sure theyâ€™re very proud of the fact that it takes Android countless handsets on various carriers to achieve this goal but somewhere deep down the desire to stay atop Google must be brewing. To some though, that speaks volumes about Apple considering they only have one current device to fend off the Google monster. Personally, I view both companies as a huge success in their own ways.