According to a recent study by Business Insider, iOS generates five times more revenue for developers than does Android, despite a significantly larger installed database. So for every $1.00 in app download revenue earned by iOS developers, their Android counterparts earn just $0.19 (via AppleInsider). 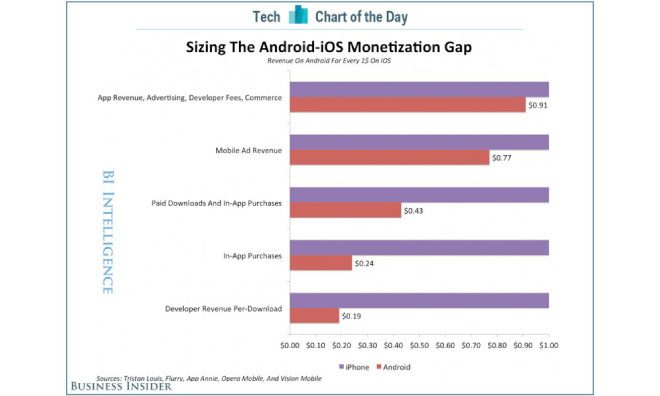 The data reveals that the revenue gap between the two leading mobile platforms is slightly narrower for up-front and in-app purchases, with Android generating $0.43 for every $1.00 on iOS, while advertising revenue is the closest at $0.77 on the dollar. Another recent study from a Facebook advertising firm revealed that iOS posted returns nearly 1,800% higher than the same ad running on Android.

“The data, collated from several sources including app analytics firms Flurry and App Annie, is the latest evidence that while Android may be winning the battle for market share, Apple is winning the war for user engagement. Time and again, studies have shown that Apple customers simply use their devices more often and are more wiling to pay for content.”

Earlier this year, Chitika Insights reported that 7 out of every 8 internet-connected tablets was an iPad, while Flurry Analytics highlighted that iPhone users spend an average of 19 cents per app downloaded against just 6 cents per download for their Android counterparts.