According to Net Applications, a leading mobile analytics services, Apple’s presence on the Web continues to expand, with Safari on iOS and Mac OS X surging this summer and into the fall.

Net Applications has released its latest monthly data on Web traffic, revealing that Apple’s iOS, which is riding the strength of the mid-October iPhone 4S launch, surged to 61.6% of all mobile Web traffic. 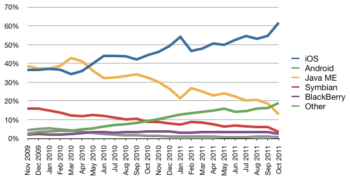 In comparison, Android’s share increased by 2% to 18.9%, while Nokia’s Symbian and RIM’s BlackBerry OS continue to rapidly lose share.

A key factor driving Apple’s Web presence is that iOS runs on three devices: the iPhone, iPad and, iPod Touch. Missing from Android’s arsenal is a device similar to the iPod Touch.

As for the PC/Mac side of Web browsing, Apple also saw an increase in its share of Web traffic, reaching 6.94% in October. That’s a strong increase of nearly 0.5% over September’s numbers and up nearly 1.5% since April.