Despite falling to its lowest market share, 64%, iOS maintained its lead in the enterprise market, according to Good Technology’s Q2 2015 Mobility Index Report. In second place we find Android with 32% (up from 26%). Windows is at 3%, while the adoption rate of Windows Phone remained unchanged at 1%. 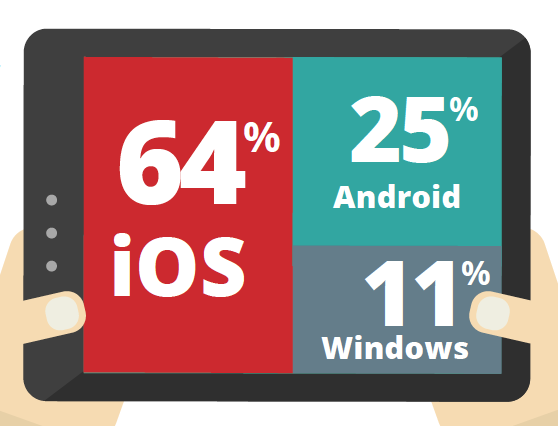 You may recall from previous reports that the iPad has dominated the enterprise market with 80%–90% of activations every quarter. Well, something changed in the second quarter of 2015: The iPad’s share drastically dropped from 81% of activations to 64%, while Android grew by 15%, to 25%. Windows has also recorded a 7% jump during the past quarter, now accounting for 11% of all activations.

iOS however, maintains a strong grip on regulated industries, while Android dominates the tech sector. Apple’s mobile operating system accounted for 79% in the public sector, 76% in education, 70% in healthcare, 65% in insurance, and 63% in financial services.

Android activations moved ahead of iOS for the first time in high-tech, with 53% of devices, but Google’s operating system also controls 48% of energy and 42% of manufacturing industry activations.