We all know that over the last few years, more and more, people don’t want to be tied to their desk, and need all their information on the go, via their smart phone or tablet computer. The past year, in particular, Apple has seen record breaking sales of the iPhone, iPod Touch, and the iPad. 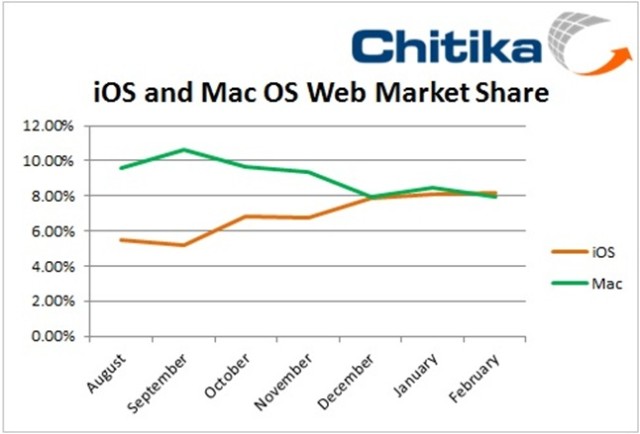 Although this is just based on ad impressions, from Chikita ads, we can still see that internet usage on iOS and OSX have evened out, with iOS slightly pulling ahead. I have noticed this, on a personal level, as there are often times that I am sitting at my desk and I’ll get a notification on my phone, (say from an RSS feed app), and rather than look it up on my iMac, I’ll just tap my iPhone, and view the content in Mobile Safari.

It’ll be interesting to see if this affects Apple’s 2012 line up of products. We’ve already heard rumours of the MacBook Pros going more the way of the Mac Book Air. They have said themselves that their customers want there devices more portable. Apple doesn’t even advertise the Mac Pro in the mainstream, and I can’t even remember the last time I saw a commercial for the iMac.