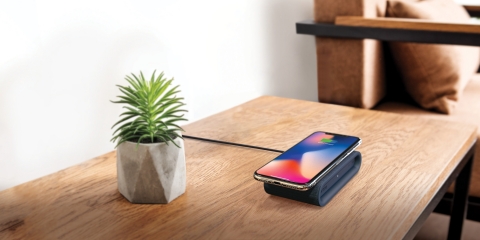 “Five years of CES Innovation Awards have driven iOttie to push the design and features in the wireless charging category to meet the needs of today’s smartphone user,” said Eric Kang, Senior Director at iOttie. “The new iON Wireless Charging product series seamlessly blends elevated style with fast wireless charging technology to offer a convenient way to power devices at home or in the office.”

Similarly, the Fast Charging Mini Pad is a compact yet powerful wireless charging solution with elevated style, whereas the Fast Charging Stand has been designed with a 65-degree tilt to allow for easy viewing of a smartphone while charging wirelessly.

The new iON Home Wireless Power Station however remains the showpiece of the release, which charges up to 40% faster than standard Qi wireless charging and supports up to six devices and two small appliances. Once users adhere a thin metal plate to their Qi-enabled phone or phone case, magnets hidden under the front surface of the device securely hold the phone in place while it charges wirelessly.

All these products will be available later this year.