As highlighted in an article over at SixColors, the Globe key in the bottom left corner of Apple’s keyboards has become something much bigger in iPadOS 15. Initially intended for supporting multiple languages, it is now a symbol for global keyboard shortcuts. 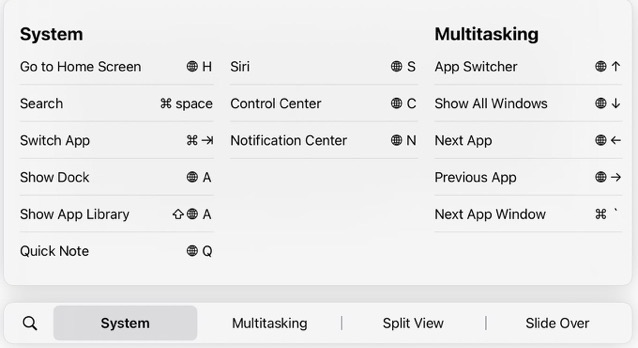 Previously, if you held down the Command key on your iPad’s keyboard, you could see a list of app-specific features and their key equivalents, which gave you a quick-reference card for keyboard shortcuts. In iPadOS 15, Apple has expanded this feature.

Not only does it list keyboard shortcuts, but it now also lists every command in the app, and you can simply click to execute them. iPad apps that build out the Mac menu bar for their Catalyst version can pick this feature up for free.

“Then there’s the Globe key. Hold it down in any app in iPadOS 15, and you’ll see a different set of commands, all of which can be applied globally. (Get it?) These menus are full of shortcuts to switch to the home screen (Globe-H), open a Quick Note (Globe-Q), activate Control Center (Globe-C), and pretty much any other system-level area.”

The Globe menu also contains loads of keyboard shortcuts to control multitasking. You can put apps into Split View and Slide Over, pop them back into full screen, and cycle between apps, all via Globe key shortcuts.

If you get to try these shortcuts out, do share your thoughts with us in the comment section.