Apple Showcases How iPads are Helping Students in Multilingual Classrooms

In a new press release, Apple has showcased how teachers across Europe are using iPads to help them work with students who are having to learn a new language. Apple shares how teachers are preparing written and video lessons using the iPads for immigrant students from the Middle East, helping them learn at their own pace. 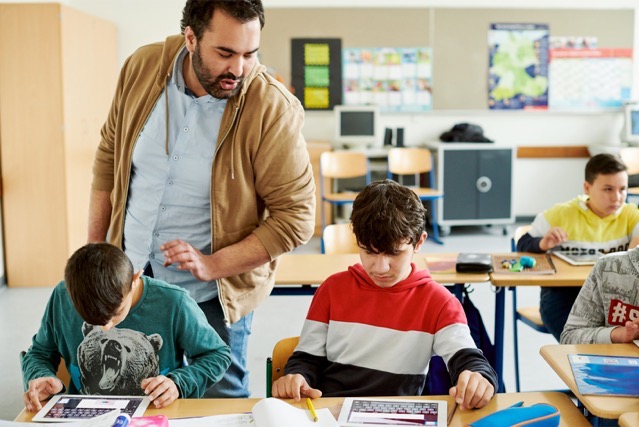 “With iPad … it’s different than when they write something [on paper] and I come in with my red pen and say ‘that’s wrong,’” says Sinaan El Haq Hadjeri of the Wilhelm Ferdinand Schussler Day School in Dusseldorf, Germany. “[With iPad,] they learn for themselves.”

Hadjeri continued that kids withdraw when they’re afraid of making mistakes. “If we try to reduce this fear, it’s much easier for them to work with us because they don’t have anything to lose,” he said.

Schools all across Europe are finding new ways to use Apple technology to help teachers and students connect and communicate.

Hadjeri says he wishes they had access to today’s technology and support when they were young. As children, both men came to Germany unable to speak the language, and know what it’s like to feel isolated in a new place. It’s also one of the reasons why the students are fiercely connected to both teachers — a feeling that goes both ways.

Wilhelm Ferdinand Schussler Day School has around 325 students from 39 different countries and about a fifth of them are non-German speakers.