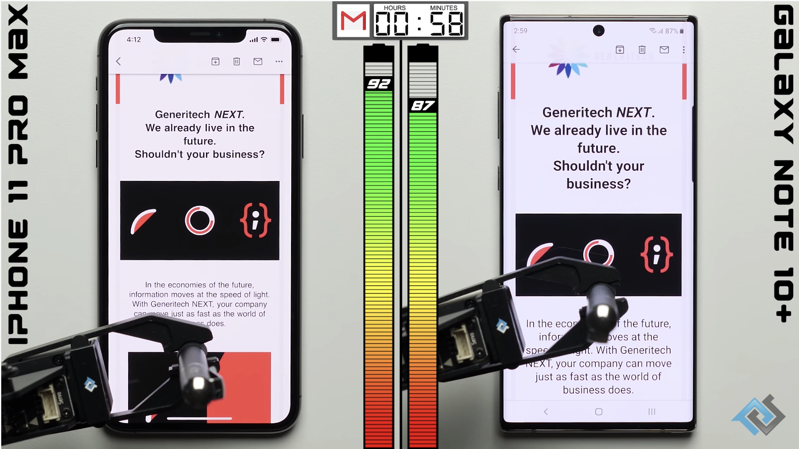 PhoneBuff had each smartphone’s display set at 200 nits brightness, then used apps like you would in real life.

In the standby test of 16 hours, the iPhone 11 Pro Max battery only dropped 6%, versus a 10% drop on the Galaxy Note 10+. Another test played one hour of gaming on both phones, with the iPhone still holding strong.

A navigation test was used in Google Maps and also a music test in Spotify, then a Snapchat test. The latter is usually where smartphones tested by PhoneBuff would die and no longer have power.

But the iPhone 11 Pro Max was the only phone ever to make it to this app cycle test, able to perform the loop for one hour and 15 minutes.

Standby time was the same for both phones, but the total time of usage for the iPhone 11 Pro Max was 27 hours and 5 minutes, while the Galaxy Note 10+ was at 25 hours and 3 minutes.

Last week, Consumer Reports said the iPhone 11 Pro Max topped its rankings for the smartphone with the best battery life.

LG is expanding the availability of Apple TV, Apple Music, AirPlay, and HomeKit support on third-party webOS Hub-enables displays. Over 100 countries and regions will now be able to take advantage of Apple's entertainment options on a growing list of third-party displays. Apple's apps such as Apple TV are currently available on LG's display and...
Steve Vegvari
30 mins ago