New images from a Twitter leaker could be our very first look at the iPhone 12’s glass back. 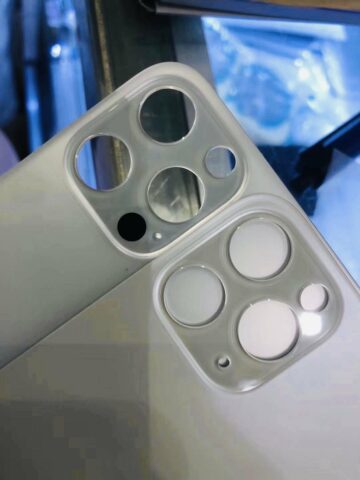 “Mr. White” has shared what appears to be a rear glass panel for the upcoming iPhone 12 Pro, showing the device’s camera module, with holes for three camera lenses, a TrueTone LED flash, microphone, and an additional cut out below the ultrawide lens hole, likely for a LiDAR scanner.

As noted by MacRumors, it’s unclear which size iPhone 12 Pro the panel belongs to, with the image causing some confusion as it is paired with a second glass panel without a LiDAR scanner. This could indicate only the larger 6.7-inch iPhone 12 Pro will gain the light detection and ranging scanner, or — if both Pro models will ship with LiDAR — that Mr. White is showing the difference between the iPhone 12 Pro and current-generation iPhone 11 Pro.

At least one of the ‌iPhone 12‌ Pro models has been widely reported to have a LiDAR scanner, first seen on the 2020 iPad Pro, to sense depth and improve AR experiences.

Anticipated to launch either in September or October, the iPhone 12 range is thought to consist of four models, with the “iPhone 12” and “Max” versions expected to have 6.1-inch and 5.4-inch OLED displays, while the “iPhone 12 Pro” and “iPhone 12 Pro” will have 6.1-inch and 6.7-inch versions with 120Hz ProMotion support and a 10-bit color depth. Powered by a 5-nanometer A14 chip, the main feature of the new models is anticipated to be 5G connectivity.