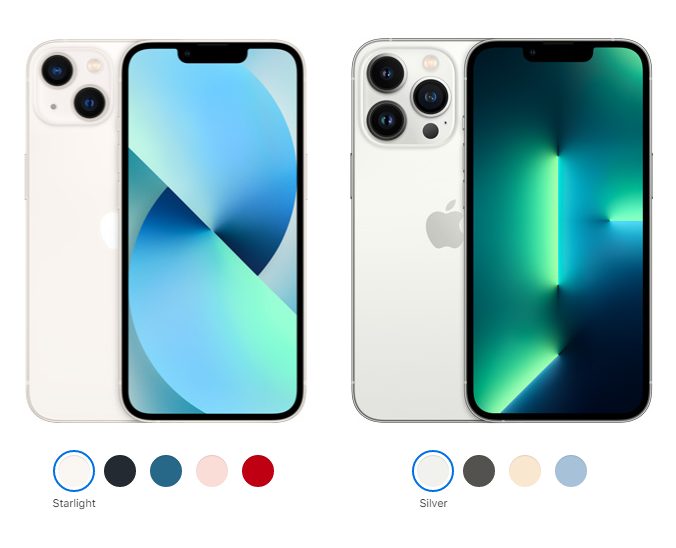 Leading the pack of announcements at last week’s ‘California Streaming’ event was the next generation of Apple’s flagship smartphone, the iPhone 13 series.

As its name suggests, the iPhone 13 Pro series is geared more towards professionals and content creators who want to squeeze the most out of their phone (as well as an undeniably superior camera array).

This time around, the ‘Pro’ iPhone is actually powered by a slightly faster chipset than the year’s base iPhone, even though both have the A15 Bionic chip. Let’s take a look at that, along with some of the other differences between the two…

The iPhone 13 Pro, on the other hand, is available in four colours: Silver, Graphite, Gold, and Sierra Blue. Recently leaked images gave us a side-by-side comparison of all the colour options available on either series.

However, the iPhone 13 Pro is the first iPhone with a high refresh rate screen, thanks to Apple’s ProMotion technology with adaptive refresh rates up to 120Hz.

The new iPhones come with Photographic Styles (for both front and rear cameras), and Smart HDR 4 for photos is also available. Both phones come with Portrait Lighting effects, but the 13 Pro gets Night Mode portraits as well.

The entire iPhone 13 line gets a couple of big improvements in video recording, like Cinematic mode for recording videos with shallow depth of field (1080p @ 30 fps) — available on both the iPhone 13 and 13 Pro.

The Telephoto lens on the iPhone 13 Pro, which the base iPhone 13 lacks, brings Macro mode. All of the lenses on each iPhone can now shoot in Portrait mode.

Front snappers on both devices are pretty similar, but the iPhone 13 Pro pulls ahead slightly with ProRes video recording up to 4K at 30 fps (limited to 1080p at 30 fps on the 128 GB version) on the front shooter as well.

The iPhone 13 Pro has a definite edge when it comes to photography and videography, but the base iPhone 13 is no slouch either.

Neither iPhone 13 series eliminates the dreaded notch Apple’s prime product line has seemingly been cursed with while competitors like Android move to (fairly viable) under-display cameras to provide an authentic full-screen experience.

However, Apple has decreased the size of the notch on both the iPhone 13 and iPhone 13 Pro by roughly 20% respectively, making the notch smaller and (hopefully) more bearable. Here’s to hoping that next year’s iPhones do away with the notch entirely.

Both the iPhone 13 and iPhone 13 Pro support Face ID, enabled by Apple’s proprietary TrueDepth camera. Touch ID is not supported on either device, unfortunately.

Both of this year’s iPhones feature Apple’s new 6-core A15 Bionic chip, which brings modest CPU performance gain over last year’s A14 Bionic.

While the iPhone 13 Pro comes with a new, 5-core GPU, the iPhone 13’s internals are slightly handicapped and limited to a 4-core GPU. This has led to the Cupertino company calling the iPhone 13 Pro’s chipset the “fastest chip ever in a smartphone”, and it demonstrated as much in recent AnTuTu benchmarks. Both devices feature Apple’s improved 16-core Neural Engine.

The iPhone 13 and iPhone 13 Pro carry the same height, width, and thickness measurements, but the higher-end model is significantly chunkier at 204 grams (vs. the base iPhone 13’s modest 173 grams).

Both iPhones have a Ceramic Shield front for added protection, as well as an IP68 certification (at a maximum depth of 6 m for up to 30 minutes).

Both devices feature MagSafe support for accessories and wireless chargers.

The iPhone 13 Pro offers all three of those storage options and then some, adding a new 1 TB option and making for the most expensive iPhone to date — the 1 TB iPhone 13 Pro Max at a staggering $2,229 CAD.

Both iPhones offer similar options for SIM cards, complete with the introduction of Dual eSIM support on both models.

The iPhone 13 lineup offers marginal upgrades over the last couple of years’ iPhones, so if you have an iPhone 11/11 Pro or iPhone 12/12 Pro, you might just be better off waiting another year or two.

However, if you’re looking to upgrade and have to choose between the iPhone 13 and iPhone 13 Pro, which direction you go will depend majorly on your budget and the functionality you’re looking for.

The iPhone 13 is a more than capable all-rounder. The iPhone 13 Pro, on the other hand, comes with an indisputably better camera setup for all your content creation needs, is (slightly) faster, has a bigger battery, and its 120Hz high refresh rate screen will feel much more fluid than the base iPhone 13’s standard 60Hz display.

Whether or not that justifies the (at least) $300 CAD premium, though, is for you to decide.

Click here to learn more about the iPhone 13 series phones on Apple.ca.

Pre-orders for the iPhone 13 started Friday, September 17, in Canada, with delivery dates quickly slipping into October. An official launch is slated for later this week on September 24.