Apple to Move iPhone 4 and Some iPods, Macs to Obsolete Products

According to some internal documents obtained by the folks over at 9to5Mac, Apple will add the iPhone 4 alongside some Macs and iPods to its list of vintage and obsolete products, a week after the release of ‘iPhone 7’. The leaked document (shown below) suggests that starting September 13th, these devices will lose support for repair services through Apple and its authorized resellers. 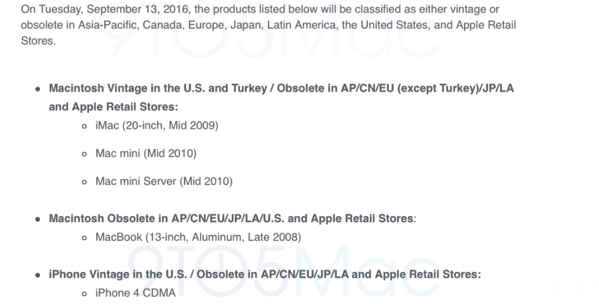 Apple is expected to unveiled the ‘iPhone 7’ this week at a special media event scheduled to take place at 10AM PST on Sept. 7 at the Bill Graham Civic Auditorium in San Francisco.

According to a report by The Intercept, Apple is using Chinese company Tencent’s blacklist to block access to certain websites via Safari in Hong Kong. Last month, Apple users in Hong Kong trying to access the code-sharing website GitLab were presented with a warning that says the website is being blocked for their own safety. Safari’s “safe...
Usman Qureshi
20 mins ago

Apple has shared a handy video on its YouTube support channel, explaining how you can add video effects when using Continuity Camera with iPhone on a Mac. If you’re using Continuity Camera with a virtual conference app or FaceTime on your Mac, you can add these video effects from Control Center while you chat. Center Stage...
Usman Qureshi
48 mins ago