If you can’t get enough of looking at your iPhone maybe you want a tabletop computer that looks like a white iPhone 4, pivots through 90 degrees and can dual boot Mac OS X and Windows 7. Maybe you want an iTableous. 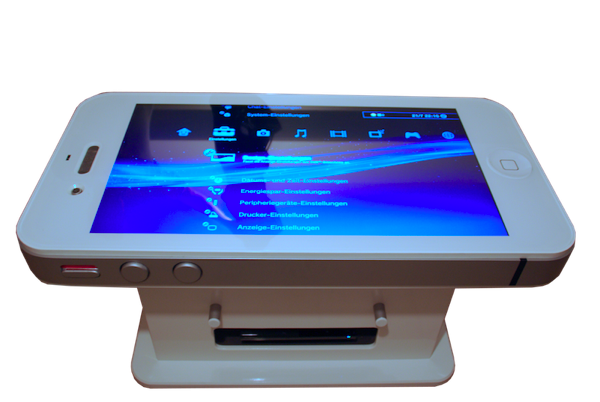 Some of the case buttons mimic their use on the iPhone. Such as, the top power will turn the computer on and off and one of the volume buttons will adjust the speaker volume. He has also put a 30-pin dock connector under the home button for easy sync.

What I want to know is where the case came from. I’m not sure if he made it or foraged it from an Apple Store.

One of the goals of the project was to “create awesomeness” – do you think he achieved that? Would you consider getting one? 14 months after the iPhone 4 release, I’m curious to know if he will make a newer one for our illusive iPhone 5.

Following Morgan Stanley's estimate that Apple’s App store net revenue tumbled a record 5% last month, CNBC's Jim Cramer has said that investors should ignore negative calls about the iPhone maker and hold onto their shares. “The next time you hear this Apple mishegoss, you need to recognize that you’re still getting one more buying opportunity in...
Usman Qureshi
33 mins ago