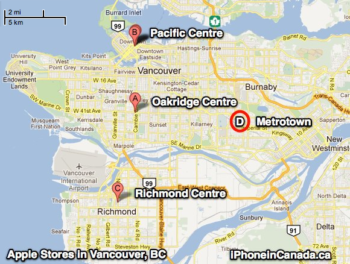 Did you line up yesterday for an iPhone 4S? There was apparent pandemonium at some Apple Stores in Vancouver, notably Metrotown and Oakridge locations.

According to people we talked to, some people their friends and family ‘join’ the line up late into the night, causing frustration for people behind them. Not only that, when doors opened clueless people made mad dashes through the mall to Apple Store entrances, causing chaos and confusion. I read tweets of people pushing and shoving, and one person suffering a panic attack. Siri would not approve.

The Oakridge line up forgot to pick up their garbage, but luckily some good people cleaned up the mess afterwards. Someone even left a couch behind. In the end, everybody got their iPhones–so why all the drama? If you were at either one of these line ups, tell us your story in the comments.

According to information we received, here are the iPhone 4S sales numbers broken down per Apple Store:

What about you? Did you buy unlocked from Apple or did you upgrade through your carrier? Vote below: