iPhone 4S Reviews Round Up: Siri Steals the Show 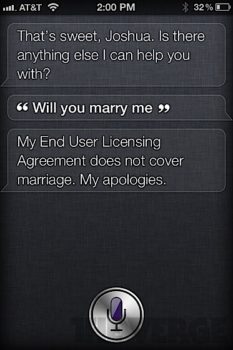 Image via: This is my next
Looks like the embargo on iPhone 4S reviews have been lifted. From what I’ve read so far Siri seems to be the star of the show, as expected. Here are some excerpts from reviews we have read so far:

Joshua Topolsky, This is my next (probably the longest of the bunch):

This is the easy part… kind of. If you’re an owner of an older iPhone, or someone looking to switch to an iPhone from a different platform, there’s never been a better Apple device to buy. The iPhone 4S is an astoundingly good phone. Between the hardware (both inside and out) and the software (iOS 5 as well as third party offerings), it’s just kind of an awesome package. The lack of LTE, a larger display, or a new design may put off some buyers, but that won’t change the fact that 4S is a force to be reckoned with.

You can look at each of the items that Apple will release in conjunction with the iPhone and be amazed with how innovative each one of them are.

When you put them all together in one product like the iPhone 4S, you have an incredibly successful product that other companies just can’t compete with.

What does the “S” stand for?

When I ask Apple this, they’re vague in their response. They note that some people say it stands for “Special” or “Super”. Others say it’s for “Speed” — much like the iPhone 3GS, the successor to the iPhone 3G. Or maybe it’s “Storage” (this is the first iPhone with 64 GB option — and with iCloud storage). Or “Sprint” (this is the first iPhone to run on that network in the U.S.) Or perhaps it’s for “Speech” or “Siri”. Either of these last two would get my vote. The point is, the “S” can stand for any number of things depending on who is using the device. Here’s all I know for certain: this is the best iPhone yet.

Nonetheless, it’s a groundbreaking combination of apps and services. Siri is legitimately magical, a feature so unique to iPhone 4S that users will jump platform in order to have. Its potential for future development is vast, too: we can see Siri spreading across Apple’s range, bringing intelligence voice control to computers desktop and mobile, home entertainment and more, the AI glue that holds everything together. In the nearer future, perhaps, the low-power Bluetooth 4.0 in the iPhone 4S could see smart watch-style peripherals and in-car infotainment integration, with Siri helping you keep your phone in your pocket and your eyes on the road.

The iPhone 4S is one of Apple’s less dramatic updates, but, when combined with the Siri, iOS 5 and iCloud features, it presents an attractive new offering to smartphone users. Some may be content to skip the new hardware and just enjoy the software and cloud features with older models. But those buying the phone will likely be happy with it.

It’s a shame that Siri isn’t available for older iPhones. Apple says that she requires the 4S’s faster processor, although before Apple bought the company, there was a Siri app that ran just fine on other models.

Jason Snell, MacWorld, in a ‘conversation’ with Siri:

Siri: “I found a number of cabs fairly close to you.” (Perfect; it didn’t dial my ex-girlfriend.)

Now excuse me while I have some reading to catch up on. This post will be updated as we find more reviews being published by the usual suspects.