iPhone 4S vs Galaxy S3 In A Drag Race Scratch Test, Who Will Win? 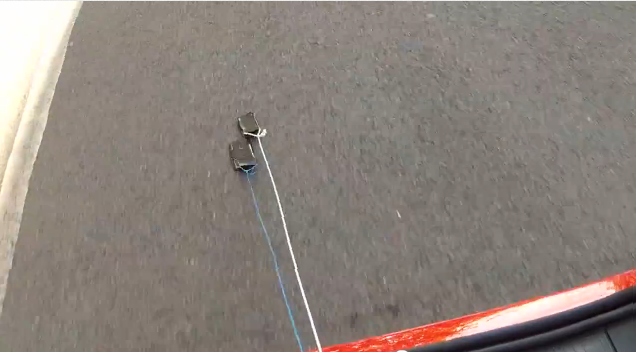 Apparently drop tests aren’t very cool anymore. I have always enjoyed watching them; they really show the potential of a particular device’s screen. But rather than a simple drop test, the guys at A Perfect Galaxy have taken the scratch/crack tests to a whole new extreme level.

We have two devices with market values exceeding $500, the iPhone 4S and Galaxy S3. Both devices are hooked up to a car’s bumper using string. The driver begins the test and he drives for nearly 30 seconds traveling at least a few hundred feet. Only one device survived, take your guess.

If you guessed the Galaxy S3, you are correct. The Galaxy S3 had suffered through a few visible scratches where as the iPhone 4S was “completely cracked and smashed to pieces.”

There you have it. The Galaxy S3’s Gorilla Glass is much stronger than the supposed Gorilla Glass on the iPhone 4S. It’s notable that the S3 probably uses Corning’s latest rendition announced during CES 2012, unlike the iPhone.

[via Cult Of Android]