Apple is not looking for people to ‘test and keep’ the new ‘iPhone 5’. That’s contrary to what the latest SMS spam wants you to know. We’ve heard from numerous users about spam being received to their cellphones that read the following:

Apple is looking for people to Test & Keep the new iPhone5! But only the 1st 1000 users that goto http://iphone5betas.com and enter the code BETA will Receive it! 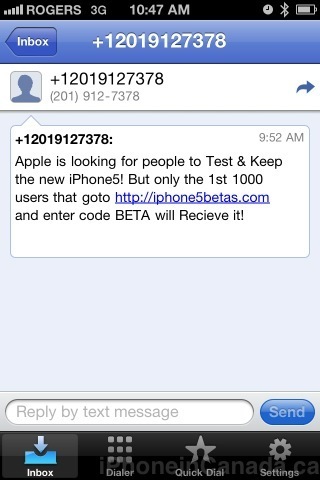 If you receive this message, ignore it as it’s fake. There are endless grammar and spelling errors, and won’t get past many of you. But there are some that will believe it and visit their website.

As first noted to iPhoneinCanada.ca via @ljmyst3ry, the number being used to send these messages originates at 201-912-7378. The area code 201 is for New Jersey. Another number being used is 443-433-6839, an area code from Maryland (thx Joe Blow). Ignore these, and tell your friends.

Anyone else receiving these SMS spam messages?