Looks like Bell is the first of the ‘Big 3’ to release their carrier upgrade pricing for the iPhone 5. As noted on their website, the 16GB iPhone 5 will cost $179.95 on a three year contract. It’s most likely Rogers and Telus will also have the same pricing scheme. 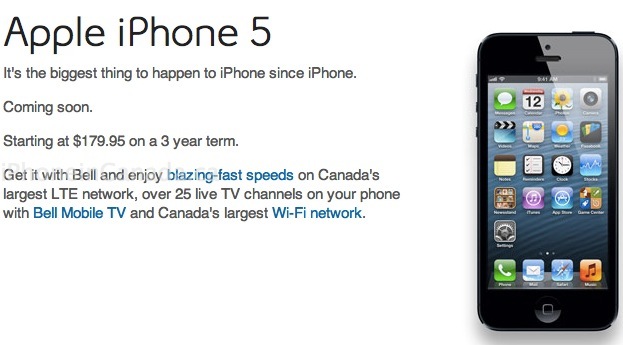 This is a $20 price increase compared to last year’s iPhone 4S upgrade pricing, which we can only assume the increase is based on increased component costs for the new iPhone. Last year’s pricing:

This year’s iPhone 5 carrier upgrade pricing, if following the same formula from above:

Bell has already confirmed with us pre-orders will take place online and in-store on September 14th. We’ll update this post to keep things simple as more carriers officially reveal their pricing.