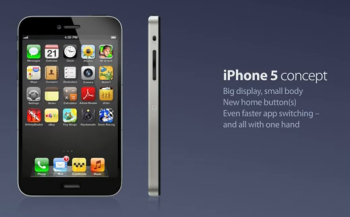 We’ve seen our share of concept videos for iOS (like those from Jan-Michael Cart), but a new video posted by AppAdvice reveals a new iPhone 5 design that features new home button placements–on the sides of the iPhone. The video was created by one of their readers, Kris Groen. His video features an iPhone with a 4 inch Retina Display, and a new way of using home buttons by using a variety of presses and squeezes.

Navigating the iPhone with these new home buttons would avoid the use of swiping on the touchscreen. Users can squeeze both buttons to get to home, go page left and right, and quickly switch apps without lifting their fingers off the device. It’s an interesting concept–take a look at the video below:

What do you think of this concept? Last year, we heard rumours of the next iPhone to have a larger home button, but never materialized.