According to mobile data analysis firm Arieso, their study of over 1 million smartphone users in a Tier-1 UMTS European 3G market over 24 hours concluded iPhone 5 users consumed the most data. The company essentially advises carrier networks on network performance and how to improve user experiences.

Using the iPhone 3G as a benchmark, iPhone 5 users demand four times as much data in comparison and 50% more data than iPhone 4S users, which were the most demanding last year. The hungriest 1% of users consumed about 40% of all transmitted data, according to the report, which is down from the 50% from last year.

The following is a chart of the comparative results by device, with the highest smartphone scores in red in each category (the results are normalized so the iPhone 3G would be 100%): 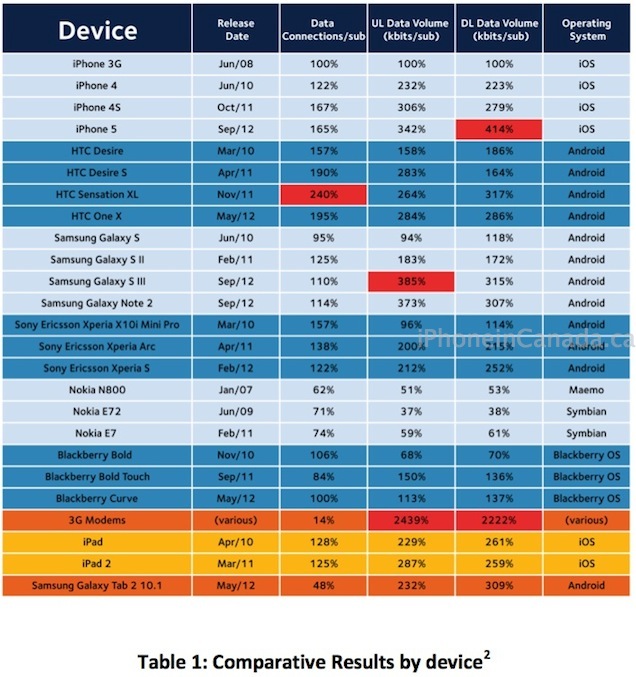 The iPhone 5 didn’t take all the glory though, as it was noted the fierce smartphone rival from Samsung, the Galaxy S III, just slightly edged the former in the “average amount of data generated and uploaded” (i.e. when users upload images to social networks, etc.). Last year, the HTC Desire and its 5-megapixel camera won this category.

Below is an infographic we received with highlights from the report: 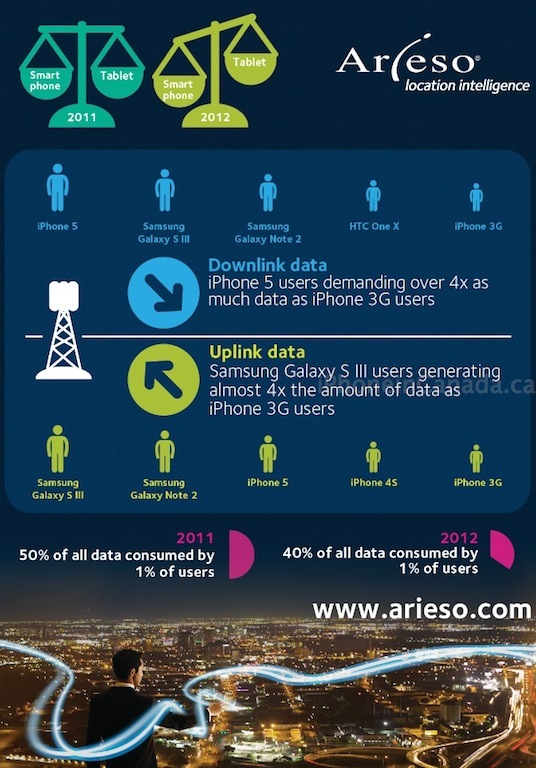 Just over a year ago, Arieso announced a similar study that concluded the iPhone 4S used double the data compared to the iPhone 4 (with some alleging Siri was the reason). It’s easy to see why the iPhone 5 would consume more data than the iPhone 4S. The A6 chip is much more powerful which means things get done quicker and more data is consumed (especially over LTE). We could also factor in iCloud as another reason for increased data usage (Photo Stream comes to mind) along with iTunes Match. As the overall iPhone 5 experience is faster and more robust, it’s fairly easy to stay connected to the device, which only debuted in September of 2012.

Our own wireless carriers in Canada have noted the insatiable thirst for data by smartphone users continue to drive revenue growth. Rogers noted in their 2012 Q3 earnings data revenue consists of 41% of wireless network revenue. Have you noticed your data usage increase with the iPhone 5?