iPhone 5 Rumour Roundup: What to Expect on Wednesday

The iPhone event is knocking on our doorstep as Wednesday at 10:00 AM Tim Cook will take the stage at the Yerba Buena Center. With the amount of leaks and rumours throughout the past few months, we have constructed an iPhone 5 rumour roundup. Sit back, grab some popcorn, and read on for the details.

Starting off with the back-end of the sixth-generation iPhone, we can expect a two-toned back plate. Just like last year’s model, a white and black model will hit the market. The back plate will feature a black/dark gray or white/silver-ish combination. Apple also may do away with the glass-backing, replacing it with a full metal solution.

The size of the screen will boost from 3.5 inches to around 4.0 inches. Nearly every single report on-hand speculates a screen size ranging from 3.9 to 4.1 inches in height.

In with the minor changes, the Facetime camera will be centered above the earpiece speaker.

We haven’t had much speculation to back the processing speeds of the New iPhone, but we do have one particular leak that revealed an A6 processor. This would be a huge upgrade over the dual-core A5 processor found in the iPhone 4S. The A6 would bring quad-core processing to the iPhone.

In effort to run the larger display and LTE services (described below) a 1440 mAh battery will be installed. This is a small upgrade from the 1430 mAh battery found in the iPhone 4S. 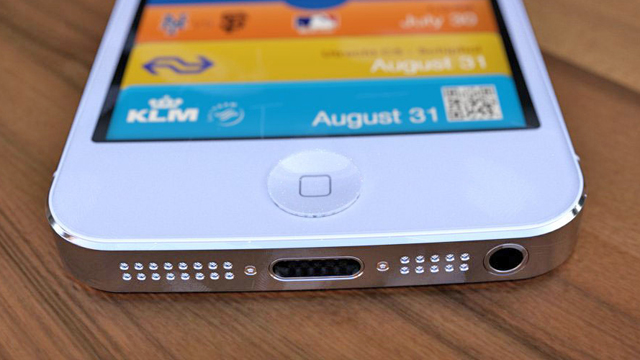 Apple’s unique 30-pin connector will finally hit the exit as a new unintroduced 8 or 9-pin dock connector will be revealed during Wednesday’s keynote. To go alongside the connector, a 30-pin adapter will sell for $10, according to reports.

The ability to run on an LTE network is nearly a given. Apple first introduced the capability with the New iPad, so why wouldn’t they add it to the iPhone 5?

The only disadvantage to using LTE is the fast battery drainage. That’s where the increased battery capacity will come to great use.

Yes, the New iPhone will come installed with the new iOS 6 operating system! Apple introduced the operating system during June at their WWDC event.  The OS includes over 200 new features such as a new mapping solution, better Siri, and Facebook integration. You can click here to learn more about iOS 6.

How About The Name?

The upcoming iPhone will be Apple’s sixth iteration of the iPhone. In my mind, the iPhone will not be officially labeled the “iPhone 5” because it’s a sixth generation phone. I furthermore expect Apple to label this phone simply “New iPhone” just as they did with the iPad.

Apple hasn’t changed their pricing in the history of the iPhone. The pricing the iPhone 4S held at its release will be the price you pay for the iPhone 5.

The camera on the new iPhone hasn’t been a huge topic in the rumour books, but we know Apple may slightly upgrade the camera from the 8-megapixel camera on the iPhone 4S.

The Micro SIM card will be replaced by an all-new Nano SIM card. We’ve seen multiple photos of the iPhone all containing a smaller SIM-card slot.

Looks like NFC won’t be implemented anytime soon, based on this observation by AnandTech.

Well, the New iPhone will have a lot to offer. I personally am excited for the release because I want to have a larger display for the first time since the 2007 iPhone release. The legitimacy of today’s rumour roundup will be told come Wednesday, so we will just have to wait and see.

What would you like to see on the New iPhone?