In almost all the recent smartphone performance tests, iPhone 5 has been put head-to-head with Samsung’s flagship smartphone, the Galaxy S III and once again, both devices go head on in yet another performance test. DisplayMate Technologies, the global leader in video diagnostics and test patterns for calibrating, optimizing and evaluating displays, reveals that iPhone 5’s display is superior to the Galaxy S III in almost every aspect (via BGR). 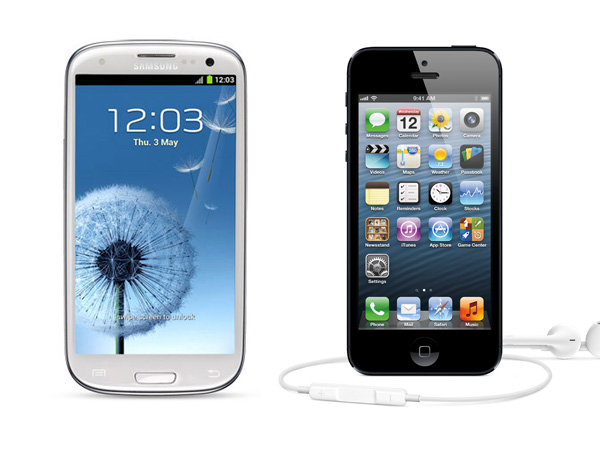 A recent display analysis from the image quality experts clearly shows that iPhone 5’s display trumps the smartphone industry, delivering the highest-quality images and videos. While the Galaxy S III also has a pretty impressive display, DisplayMate found Apple’s display to be much better, saying that Galaxy S III’s display has not yet been refined to the same degree as LCDs, particularly the IPS LCD on the iPhone 5, so “it doesn’t objectively test or perform as well as Apple’s smartphone”.

DisplayMate found that the Galaxy S III display had a brightness that was “about half of the iPhone 5 due to power limits from the lower power efficiency of OLEDs” and a color gamut that “leads to distorted and exaggerated colors… which adds a Green color caste to many images.”

DisplayMate’s advice to Samsung is to keep refining OLED technology and to consider using a smaller display in the future to avoid power consumption issues that have hurt display quality in the Galaxy S III. And of course, DisplayMate says Samsung should recalibrate the display’s color gamut to avoid giving all images too much of a greenish tint.

The tests also revealed that all of the photos and their colors on both the iPhone 5 and new iPad appeared virtually identical, which is one of the most impressive features of iPhone 5.